If you’ve seen Point Break as many times as we have, you’ll remember the famous skydiving scene. You know the one: skydivers in freefall for almost four minutes (um, three times the normal amount!), having a full-blown conversation in the sky (sooo not happening!). This scene plays out examples of the many misconceptions out there when it comes to skydiving. In this article, we will debunk the most popular skydiving myths. Read on…

Due to television shows and popular movies, most people think they have a pretty good idea of what skydiving looks like before even trying it! Maybe to your surprise (or maybe not), the way skydiving is portrayed on television is usually WRONG – especially when it comes to how the gear looks and works. Don’t worry, we’re not offended – we understand that this is for pure entertainment and is meant to add excitement and drama to keep you intrigued from title to credits. But, we’re going to set the record straight, once and for all. Here are 5 skydiving myths, debunked!

SKYDIVING MYTH #1: EVERYONE FALLS AT THE SAME SPEED

It is true that the average terminal velocity (maximum freefall speed) is around 120 mph for most skydivers. However, figuring out your fall rate requires consideration of weight (body weight and gear) and surface area.

To put it simply: more weight + less surface area = faster fall. And, of course, the opposite is true too – lighter skydivers fall slower, as do those who present more surface area to the wind.

These fantastic physics facts have enabled skydivers to figure out how to maneuver their bodies in ways that can increase or decrease their fall rate. By presenting more surface area to the wind, you create more drag, which slows your fall rate. This is how skydivers can “catch-up” to their friends in the sky. Streamline your body orientation and/or add weight (some add literal weights), and you lessen drag and speed up your fall rate.

*Fun fact: the current world record for the fastest skydiving speed is 373.6 mph held by Henrik Raimer at the 2016 FAI World Championships! Woo!

SKYDIVING MYTH #2: YOU GO UP WHEN THE PARACHUTE OPENS

So, not going up – just slowing down. 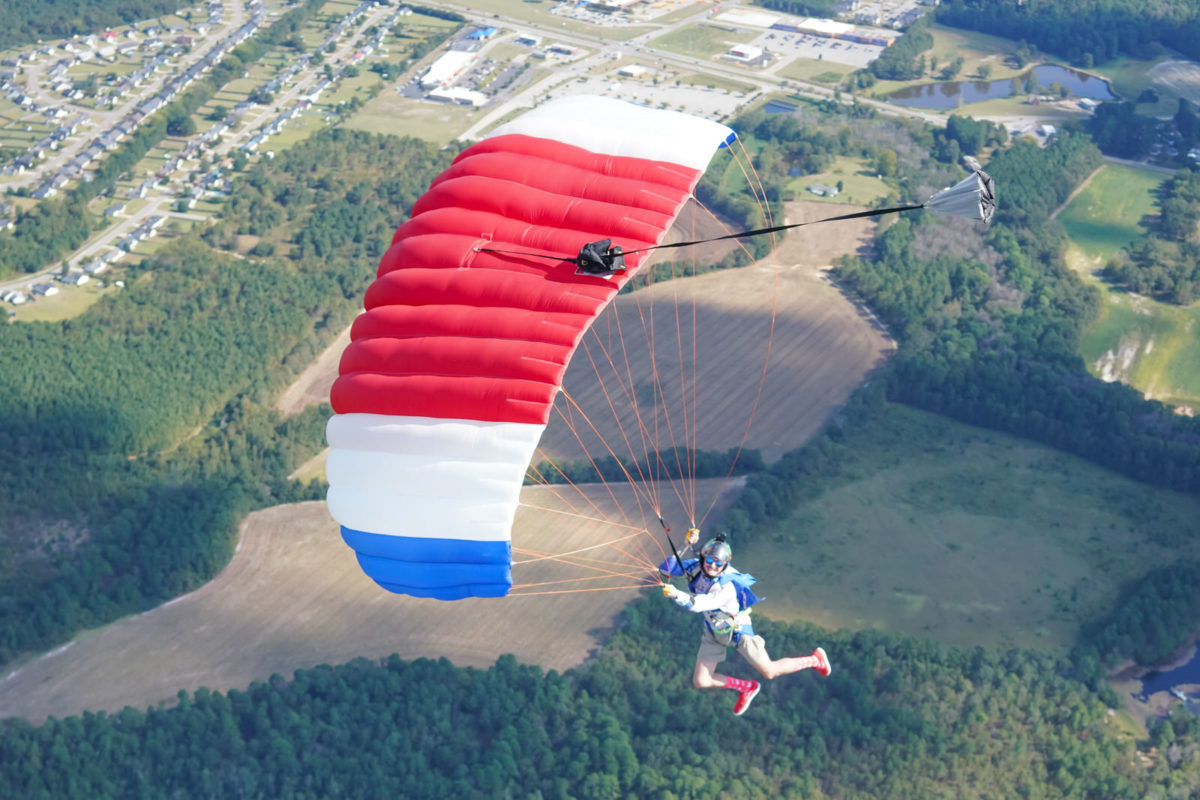 If you’re a statistics person, this one’s for you: skydiving is less dangerous than driving a car! In fact, the United States Parachute Association (USPA) recently reported that the sport of skydiving has never been safer. They’ve been tracking skydiving safety stats since 1961 and, thanks to advancements in skydiving technology and sophisticated training tactics, the risk of dying from skydiving is low.

We’re not suggesting skydiving isn’t risky – of course it is! But how risky is skydiving? Peep these no-fun but important stats:

Skydiving is an extreme sport, so it can attract a lot of attention, and not always the good kind. Fatal accidents happen every day from everyday things. Relatively speaking, there are few fatal accidents in the skydiving community – especially on the tandem side of the sport. Most skydiving fatalities are related to operator error; not equipment malfunction, which is the typical fear.

Skydivers are all about calculated risks and mitigating those risks by being extremely safety conscious. What most non-skydivers don’t realize is that there is a ‘back-up’ parachute, called a reserve, in your skydiving rig. If something were to go wrong with the main canopy, there’s another one immediately available. Every tandem skydiving rig also includes an AAD (Automatic Activation Device), which automatically deploys the parachute if the instructor hasn’t manually done so by a predetermined altitude.

Some people say it ‘feels like a roller coaster’ when you skydive because it will give you the ‘stomach drop’ feeling, but it’s pretty rare that you’ll get to experience this tummy tickling sensation during the skydiving freefall.

In contrast to a roller coaster, which often drops from a stand-still, when you skydive you’re on a fast-moving plane. When you exit, you’re already moving forward at a significant speed – you only increase your speed a little bit more in freefall. And thanks to terminal velocity, you won’t even feel like you’re falling. A lot of first-timers even describe freefall as more like floating on a column of air.

The other thing to consider is ground rush. On a roller coaster, you’re acutely aware of how close you are to the ground and it feels as though it’s rushing up at you. When you skydive, though, you’re two miles or more up and so don’t experience that sensation. This is why so many people who are afraid of heights can skydive without issue!

Skydiving is an all-encompassing experience that will stick with you for a lifetime. Between check-in, training, waiting to get on an airplane load (sometimes weather causes delays), and of course the skydive itself – the entire process can last all day!

The cost of your skydive is all-inclusive: your 20-minute prep class and use of skydiving gear, the plane ride to 13,500 feet, your skydive with a certified tandem instructor, and your handy-dandy first-jump certificate. If you consider all that goes into your first skydive, the memories you’ll make, and the impact it’ll have on your life forever – it’s totally worth it!

And though tandem prices may feel steep, consider adding the photo and video package. You only make your first skydive once — don’t miss out on reliving the experience again and again! Plus, we have great group discounts and offer the opportunity to book your second tandem at a reduced rate if you make it before you leave the dropzone.