How do parachutes work? Reasonable question if you’re about to make a skydive (or even if you’re just interested in learning the mechanics behind skydiving)! After all, if you’re going to launch yourself out of an airplane and put your trust in a big ball of fabric, it helps to know the science behind parachutes.

You’ll be relieved to know they are much more than a haphazard hodgepodge of material and stitches, there’s a fine-tuned design behind it all. How does a parachute work? The simple answer is with the magic of air resistance and human ingenuity.

Here’s a quick science refresher to get us started on our journey to discover how parachutes work.

The strength of gravity pulls us all to Earth uniformly: whether a stone or a feather, no matter the object, it will have an acceleration of 9.8 m/s² downward to Earth. In a vacuum with no air, you’d see a feather and a stone hitting the ground at the same time. So, how exactly is it that in the real world the stone reaches the ground first? Well, this is where air resistance makes its appearance. The feather hits the ground after the stone not because it’s lighter, but because the feather catches more air as it falls; the drag of its surface area slows it down. 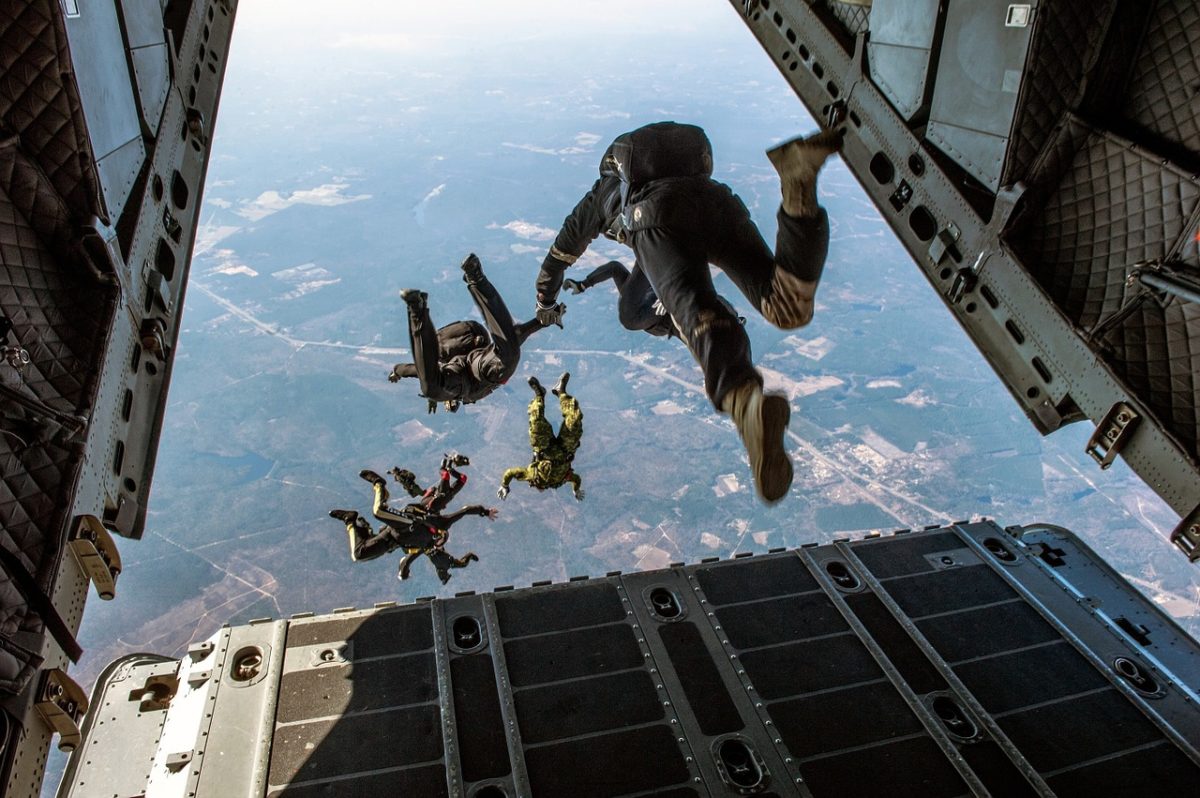 In part, the science behind parachutes is that they make clever use of air resistance. You see, though it’s invisible, air is composed of gas molecules and as you move around, they’re pushed aside. The larger space you occupy and the larger surface area you have, a greater amount of air resistance results.

To take advantage of this fact, parachutes are often made from a lightweight nylon that has been specially treated to be less porous (that is, it doesn’t let as much air through). This allows your open parachute to create more air resistance and to drift toward the ground slowly and safely.

Terminal velocity is a point at which there can be no further acceleration. This constant speed is reached when the force of gravity is countered and balanced by the resistance of the medium an object is falling through (like air).

How does this apply? Your parachute allows you to descend more slowly because it lowers terminal velocity by increasing your air resistance. Most parachutes are designed to create a large amount of drag and allow you to land at a safe, low speed.

Parachutes today are designed for a myriad of functions. Military operations utilize a parachute that is dome-shaped, providing only basic steering and are used by the military for the insertion of paratroopers and gear. On the other hand, civilian jumpers most commonly use a rectangular Ram-air parachute, one constructed with a series of tubular cells that inflate as air is forced into each chamber. The result is a semi-rigid, curved airfoil wing that delivers higher performance and increased maneuverability.

All recreational skydivers’ jump equipment contains a dual-parachute system: a main parachute and a reserve parachute (the back-up). These two parachutes are packed within a single backpack-looking apparatus we call the container.

The main parachute is deployed by a miniature chute, known as the pilot chute. At the appropriate altitude, a jumper will extract the pilot chute from the elastic pouch, where it is securely stored, sewn on the bottom of the container.  The pilot chute inflates and creates enough force to extract the main parachute from the container. The main parachute is designed to fill with air and inflate in a slow, efficient manner. The reason for the delayed opening is to avoid too much opening shock on the body. Think coming to a slow, steady stop at a red light versus slamming on the breaks.

Now that you’ve got the physics down low to the science behind parachutes, why not let us show you firsthand? Schedule your skydive with Skydive Paraclete XP today.

I did my fist tandem jump yesterday with Jon. It was one the best things I have ever done in my life. I wish to thank everyone there for their professionalism and yet you made it so much like being a part of team and a family.