Dude, skydive landings are SO hard. Landing means that your skydive is officially over, and you have to pack your parachute and wait a whole–What? Half-hour?–for the next one.

Just kidding. As a matter of fact, most new skydivers are bowled over by how hard skydive landings aren’t. We owe this to a number of factors, but it’s modern skydiving technology that really put the kibosh on bag-of-potatoes landings. Here’s how parachute landings have evolved–and what you can expect when you make a skydive.

The History of Hard Parachute Landings

As you are no doubt aware, modern, square parachutes were not always the conveyance used to get from exit altitude to the ground. While today they’re used for specific military operations, cargo, cartoon characters and the very-occasional BASE jump aimed at a body of water, round parachutes used to be The Only Way. 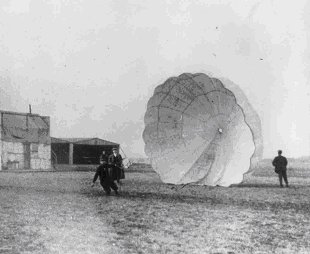 Those first round parachutes were, for the most part, developed for military applications. For these paratrooper ops, the round parachute’s lack of steering was a non-issue; the skydiver was intentionally not given a choice of landing areas. When you don’t get to choose where you land, round parachutes are fine–since there’s not much control input, you go where you’re dropped.

It’s not just about the ruh-roh potential of landing in a tree, of course, that contributed to the regular hard landings under round parachutes. While modern parachutes have a method of slowing down close to the ground (which we’ll get to later), round parachutes, um, don’t. They descend more slowly than modern parachutes, but they continue descending at pretty much exactly that rate all the way down to the ground. You can think of it this way: Would you rather ride your bicycle into a wall at a constant rate of speed, or zoom toward the wall in a car that you confidently knew you could brake to a stop before impact?

Baby-Soft Landings of the Modern Era

As the sport grew, thousands of sport skydivers were riding their proverbial bicycles into the proverbial wall, year in and year out. Many ankles didn’t survive those higher parachute landing speeds. Many, many butts were bruised. With the burst of new interest in freefall, advances in technology were in the cards–and a flurry of independent brainiacs, as well as staff brainiacs at the skydiving gear manufacturing companies (often, founded by riggers whose bread and butter had been modifying military surplus equipment) had the same idea at roughly the same time. Could we glide?

The earliest versions of the gliding parachute weren’t “square,” per se. They looked more like minimalist paragliding wings than the equipment we use now. But the idea was the same: to pack the same dynamics that allow airplanes to fly into foldable fabric that would come out of a backpack-style harness in roughly the same way as a round. With quite a lot more R&D–official and unofficial–and quite a few more bruised butts and ice packs, the square ram-air parachute was born.

A square parachute is a totally different animal from a round. With a square parachute, the athlete is afforded approximately a billion times more control over her own destiny with the ability to speed up, slow down, turn, stall, surge, spiral and–perhaps most importantly–flare. A “flare” is the technique we use to slow our parachute down for a soft landing (in the same way as the aforementioned car slows down before hitting the wall). Often, we can land as softly as a little fluffy fairy alighting on a leaf. The era of the bag-of-potatoes crash landing is officially over, and has been since the 90s.

If you’re ready to flutter down on your very own pair of (shared) fairy wings, you may rest assured that you can. Tandem landings–owing in great part to top-notch professional instructors (like ours at Skydive Paraclete XP) and ginormous tandem parachutes–are legendarily soft. For extra insurance, we recommend that our tandem students practice baseball butt slides, as stand-up landings look kinda like a 4-legged race and can put ankles in the danger zone.

Ready to see just how soft a skydiving landing can be? Put down that industrial roll of bubble wrap and come and see us in Raeford, North Carolina. We’ll show you a fantastic time and then set you down as gently as can be.

Awesome environment, by far the best dropzone I've been to. I finished my AFF skydiving school here, they have super experienced instructors not to mention the amazing facility with top of the line equipment. Everyone here is always in a good mood willing to help you with any questions or concerns you may have as a tandem or AFF student.