We’re pretty excited about something happening right now at Paraclete XP. If you’re a stoked sport skydiver looking to expand into the next phase, you’ll probably already be aware that the big skydiving rating schools on the East Coast are either north or south of our gorgeous part of the USA. That’s about to change! Andy Plisko, one of our favorite hometown jumpers, is founding a skydiving school right here at Paraclete — in signature Andy style. (More on that later.) 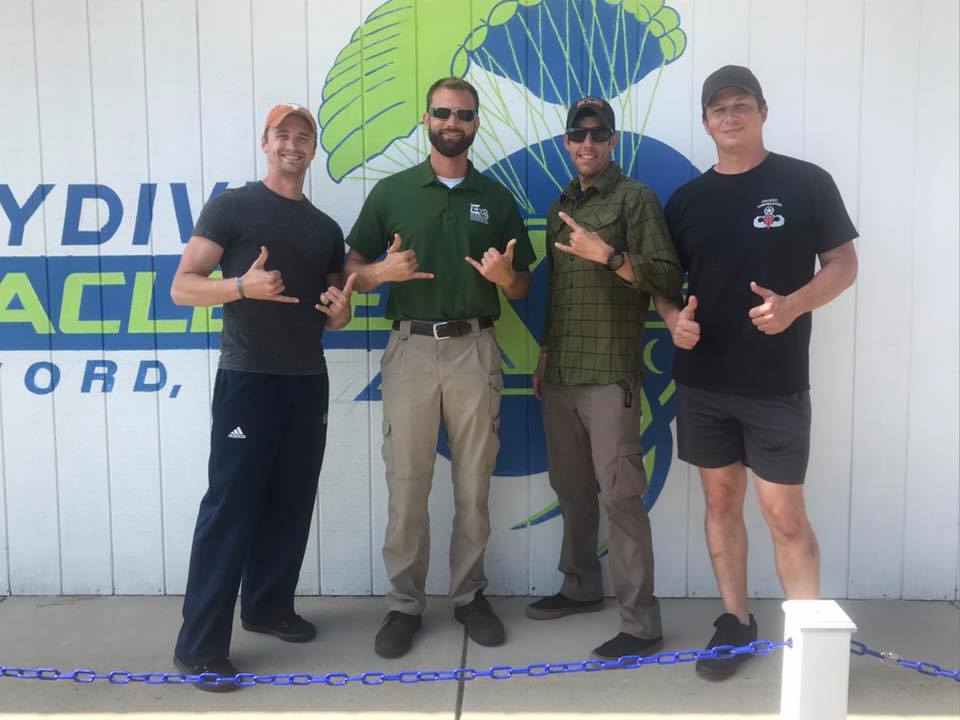 The first thing you’ll learn about Andy is that he is a dyed-in-the-wool teacher. He has been teaching since he first started skydiving. Within his first summer in the sky, Andy earned his Coach rating; the next year, AFF and Tandem.

“I haven’t stopped teaching, ever,” he smiles. “All my background with skydiving has been 100% teaching. It is all I’ve done.”

“Funny story,” he adds, “I was asked to go up for a jump with Kirk Verner, Lauren Byrd and another hotshot friend of mine for a 4-way. Those are pretty big names. They called me up one night and gave me a start time of 7 o’clock. I was, like, Whoa! Are you trying to embarrass me? I don’t do 4-way. Don’t be mad if you see me ask you to check your altitude or tell you to straighten your legs. Honestly, I love it. I like the challenge when I am trying to help somebody. And that everybody you teach eventually becomes your friend.”

Just like most of the rest of us, Andy didn’t start out as a career skydiver. His main career path was in the military for years. When he got out, he worked construction, skydiving on the weekends.

“Construction doesn’t have a good future unless you become a general contractor,” he says, “so I wanted to pursue a career in skydiving. Because I have a background in the military, contracting [in skydiving] popped up in my mind — teaching [skydiving] in Yuma [Arizona, a major military airborne training area] or something like that. I went on all the websites and quickly learned that all those opportunities require Coach Examiner, Tandem Examiner, or AFF Examiner USPA ratings.  Every application, in fact, had ‘Examiner’ written all over it. So that’s what I started doing.”

Andy started going down south to train with Bram Clement at Skydive Ratings at Florida’s legendary Zephyrhills dropzone. He started spending his summers working here at Paraclete, moving down south for the winters to get rated. He kept at it for three years and picked up all his Examiner ratings. He did not, however, want to stick around Florida forever.

“North Carolina is absolutely full of military freefall,” he says, “What with Fort Bragg — and the Air Force — and [Paraclete] is the closest drop zone to them, so lots of military folks jump here. Sometimes, I’ll be talking to someone, joking around and calling them by their actual name — just somebody I know — and then a private walks by and starts out by addressing them as Major — as Colonel — and the guy is, like, Calm down, I’m here fun jumping. When I was in the military, I’d have been sweating right now standing next to these guys. Here, they’re my buddies.”

Those buddies ended up giving Andy a very interesting idea. They started asking him if they could start putting his name in the hat for contracts.

“My kids are in North Carolina — my daughter is 13, my son 10, and my stepdaughter is 8 — and I love jumping at Skydive Paraclete,” he explains, “So I decided to go for it — to take my chances on my own and start my own business so I could be close to them.”

“I started the articles of organization with the Secretary of State, and I officially have an EIN and all that stuff,” he says. “And a DUNS number, too, because most of the people taking my courses thus far have military paperwork, so I have to register with the government.” He laughs. “I won’t lie; it has been stressful. I am a skydiver, not a businessman.”

True to form, word of the availability of a local Examiner for Coach and Tandem spread quickly around the regional military skydiving community. It seems like a no-brainer to have an advanced school like this at a hub as big and busy as Paraclete XP.

“[Paraclete XP] runs things here from a military standpoint,” he says. “They put people in charge who should be in charge. Because of that, everybody does things the right way. They have taken all the recommendations of how to teach the [skydiving] progression and made it into something even better by adding a tunnel component. I like working here and teaching courses here because the candidates in my classes who want to be Coaches, an AFF Instructors and Tandem Instructors can look around on the dropzone and see the gold standard of instruction happening right behind them. I don’t feel like I am preaching a double standard, and that says wonders about Paraclete.”

All that military stuff in stride, Andy insists that, even though he has worked with plenty of top-shelf mil badasses (the Black Daggers among them), Evolution Ratings is certainly not just open for military candidates. Its doors and arms are definitely open for civilian students.

As of right now, Andy is running courses and working on getting his classroom set up to his signature sky-high standards.

“I was running a tandem course about two weeks ago with the Black Daggers demo team,” he smiles, “and they informed me that the Army Times was on the dropzone to take pictures of us.  I said yes, they can, but only when we’re jumping or by the aircraft.” He winks. “Nobody gets to see the classroom until I say so.”

Interested in going further as a skydiver with Evolution Ratings? Get in touch with Andy on the company’s facebook page.