If you were to ask Jessie Thompson if she “flies like a girl,” she would probably proudly answer, “Hell Yes.” This female phenomenon is making her way through a male-dominated sport with style. Here at Paraclete XP she wears several hats: Tandem Instructor, AFF Instructor, Videographer, and Load Organizer. She says, “Basically, I will happily get on the plane whenever they tell me to.” 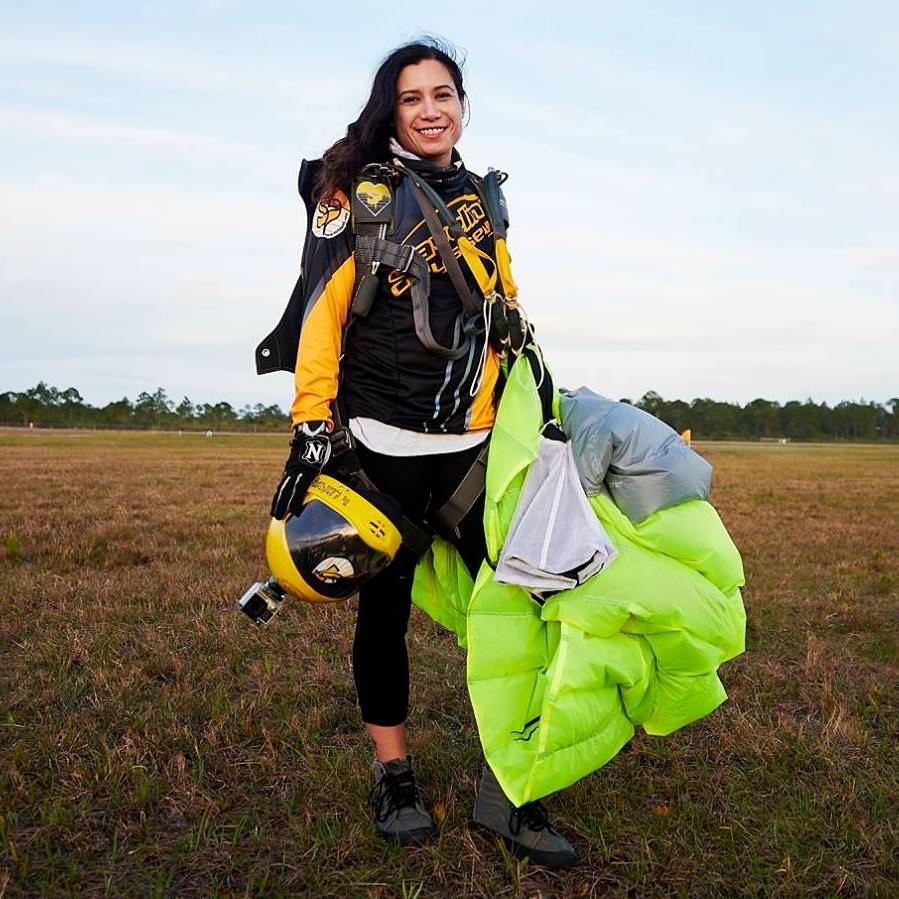 But where did this dynamo begin?

Jessie had always wanted to go skydiving. One summer, she and her sister decided to celebrate their birthdays with a skydive. This jump came in the wake of some devastating news. About a month before, Jessie’s Grandmother had been diagnosed with Stage 3C Ovarian Cancer. She says, “I was really close with her and was under a lot of stress, spending a lot of time at the hospital with her and my grandfather. When I made my first jump it was like hitting the reset button, and I wondered if women could be tandem instructors too.”

Ultimately, it would end up that this jump would mean much more than simply celebrating another revolution around the sun— “I remembered that to be happy you have to be present in the moment. In skydiving, that moment is the only one that matters, literally. I couldn’t wait to do it again. I made two more tandems that year and then saved up to get licensed. It helped me to truly appreciate the moments that we have with our loved ones.”

Inspired by the sky, Jessie kept at it and received her A License in April 2012. So what’s she up to now? Well, currently, Jessie is both working in the industry and ‘playing’ in the industry. This brings up a pretty tricky situation: how does she find a balance between the two?

“I have always been adamant about skydiving for myself as much as I work in the sport. It’s important to funjump so that we remember why we love this sport so much and don’t get burned out on it. I make it a point to make a funjump whenever I work and to participate in events and camps that work on my own goals. In my other job as a Marketing Rep at Sun Path, we have been lucky to organize some of our own freefly events this year as well.” 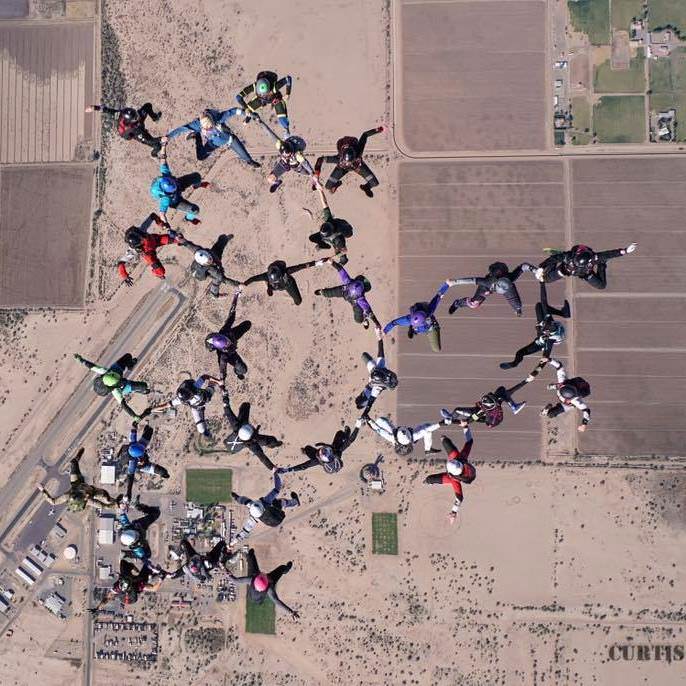 Those funjumps she mentions? Well, Jessie’s funjumps have been record-setting. Literally. You see, Jessie was a part of the Invitational Sequential that was sponsored by Red Bull! (You can pick your jaw off the floor now.)

About the record, Jessie says: “It was an amazing experience. We held a forum with some professional female athletes from other sports and discussed the issues faced by women who participate in male-dominated sports during our weather hold. When the weather finally cleared we got the record in the first shot. Everyone flew for a purpose that morning, knowing this record was going to be used as a catalyst for this issue in mainstream media on Women’s Day. It is an incredible feeling: being part of a team for a greater cause. Last fall, we set the Women’s Upright World Record and that was a lot harder, but everyone worked together and maintained a positive attitude about how hard the challenge was. When we finally got it, we flew it for 13 seconds and landed all smiles. The amount of support and community you gain from your fellow female flyers makes the experience of Women’s Records so valuable. We hope that it will inspire more women to get after their goals.” 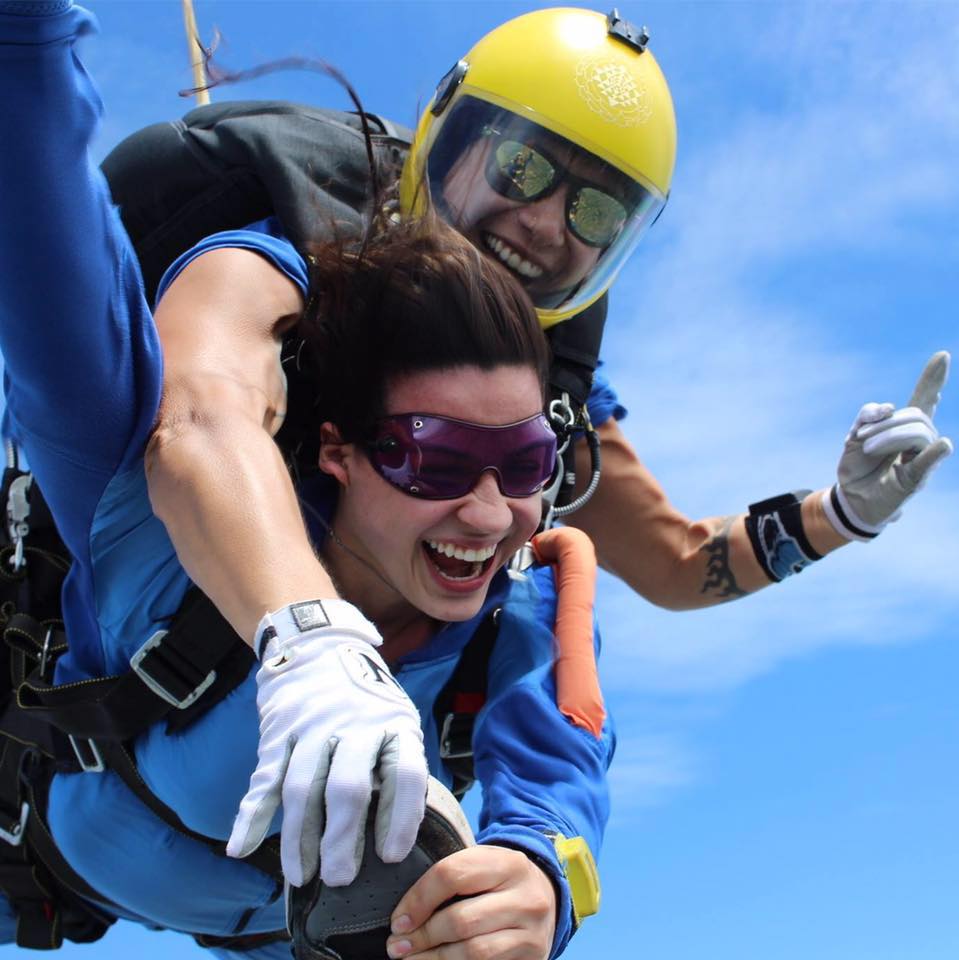 Jessie isn’t resting on her laurels either. While she didn’t get an invite to the 200 way held by Skydive Chicago, she has no intention of giving up. The reason she didn’t make it? Weight: “I finally had to suck it up and start flying with a weight belt. The men are a lot faster, and I struggled with maintaining levels until I got on the formation. I’m kicking myself for being too stubborn to wear one earlier, but this won’t be the last opportunity. There will be others, and I learned a lot from the experience.”

“Set goals and don’t be afraid to ask everyone to jump with you. You might not be ready for every jump, but don’t stop trying and don’t take it personally if you have to sit one out. This sport gives us the opportunity to meet some amazing people and to challenge and face ourselves in ways that few people have the opportunity to do. Be humble, but confident; stay positive and hungry to learn and realize that our minds are the only thing that really limit us. There are no limits in the sky to what we can accomplish, and the journey to reach your goals is part of the fun.”

If you’re interested in testing the saying “the sky’s the limit,” swing by Paraclete XP. We’d love to show you it’s not—it’s just the beginning!