What drives people to push beyond their limits—to challenge themselves mentally and physically—to do something that’s never been done before? As if skydiving weren’t impressive enough, there are those within the sport that have an appetite for even more.

Whether you’re fresh from your first jump, on the way to achieving your A license, or maybe just looking for inspiration, it’s hard not to be wowed by the impressive skydiving records that professional skydivers have achieved. 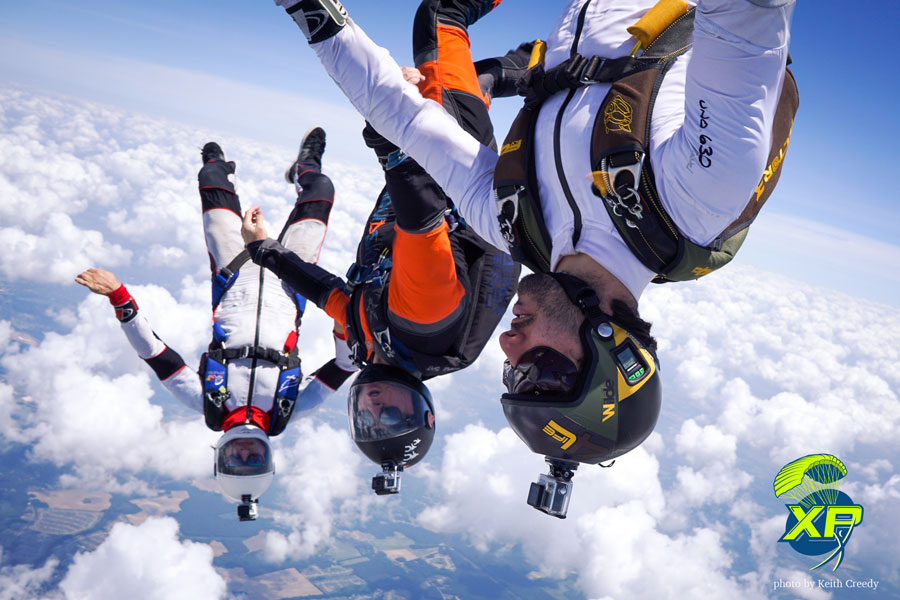 As skydiving records are tiered, they can be issued at the state, national, and world levels. And you know what? New state skydiving records are being achieved almost every month! Skydiving records can be given for many different achievements: Accuracy Skydiving, where jumpers aim to land on a target the size of a nickel; Speed Skydiving, where jumpers compete for the fastest freefall speeds; Formation Skydiving (FS), where the goal is to complete a single formation with as many people as possible; Longest Sequences, where skydivers strive to build a series of formations as quickly as they can to attain the greatest number of points possible in an allotted amount of time; and several more.

Back in September of 2019, Skydive Paraclete XP hosted the USPA Skydiving Nationals, during which 28 state-level records were set and 7 national-level records were achieved. Several of these records, like the state records for the 4-way Longest Sequence, the 8-way FS Highest Average for 10 Rounds, and the 16-way Longest Sequence were secured by local sponsored teams. An additional notable national record was set at Skydive Paraclete XP  when on a speed skydive Maxine Tate achieved the highest average speed for a female skydiver of 417.4 kph. Don’t worry we will do the conversion for you: that’s a whopping 259 mph!

Now that we’ve shown the records made at home,  let’s take a look at some of the most incredible world record skydives to date.

Skydiving Record for Most Jumps

In 2006, Jay Stokes completed 640 skydives in a mere 24-hour period. Though fatigued, Jay would jump, land, pick up another rig, and run to the airplane to do it all again. For reference, even avid skydivers barely accrue 300 jumps IN A YEAR. To double that in the measly span of 24-hours is definitely deserving of a record.

On November 27, 2016, Red Bull athlete Amy Chmelecki along with co-organizers Melissa Nelson-Lowe, and Sara Curtis led a group of the most incredible female skydivers you can imagine to achieve a world record for the largest women’s vertical skydiving formation. The record was the product of two years of preparation and 15 jump attempts. Finally, on the 16th attempt, a new 65-way women’s Vertical Record was secured.

Over the skies of Chicago, Illinois on July 31, 2015 a world record organized by Rook Nelson was shattered. Exiting from 7 separate aircraft and given only 75 seconds, 164 skydivers completed the largest vertical formation skydive the world had ever seen. As a result of large-scale effort and dedication, this record was achieved on the 13th attempt.

The 400-way formation skydive that took place in Udon Thailand back in 2006 is, to this day, known as one of the most epic world records of all time. To complete the record, 400 of the most experienced jumpers in the world had to exit from an incredible 24,000 feet to allow enough time to build the formation. To further put this feat into perspective, consider that it took the resources of the entire Thai air force and 300 tons of Jet-A to provide the lift power to make this record possible.

Though it’s not technically skydiving, this record deserves a shoutout. The Guinness Book Of World Records is a bound, hallowed hall of amazing feats and achievements, and now, skydiver and BASE jumper Nicole Moon has her place within it. Inspired by the women that fought 100 years ago for the right to vote, Nicole completed 37 BASE jumps from the Perrine Bridge within 12 hours. She is the first female BASE jumper to hold a world record.

Want to know something about each of these record holders? They all began right where you are…thinking about skydiving. Begin your journey today and taste flight with Skydive Paraclete XP.

As a member of the Canadian National 8-way skydiving team, we have trained at many DZs over the years. By far, we have never been treated as well at any other drop zone in the world. This is our new go to DZ. Cannot say enough good things about this operation!!!