You are about to enter a whole new world as you step from the parking lot onto the property of Skydive Paraclete XP. The hum of airplane engines hang in the air, the blossoming and colorful parachutes will fill the sky, and there will be a contagious buzz. When you hear people talk, it will be like listening to a foreign language and may feel a bit intimidating. However, we want to welcome you to this heart-pumping world by helping you understand some skydiving terms and skydiving slang.

When you’re new, you’ll be exposed to a certain set of skydiving terms. In order for this new world to not feel so intimidating or overwhelming, we’ll go over a few basic terms and a bit of skydiving slang to help you along the way:

Tandem skydiving  – this may seem obvious, but for the sake of being on the same page, let’s explain. Tandem Skydiving is the act of being a passenger harnessed to an appropriately rated skydiving instructor who will wear the container and parachute system.

Tandem skydiving began in the early 1980s by early equipment innovators Ted Strong and Bill Booth (legends!). They each developed a system that could accommodate two people connected together used for skydiving. This technology opened a door to skydiving, as it made it more accessible for people to try. Today, tandem skydiving is the most popular way to make a first skydive.

Dropzone – well, it isn’t just a movie with Welsey Snipes! It’s a skydiving term used to describe the skydiving center itself. A little skydiving slang and we simply call it a “DZ.” 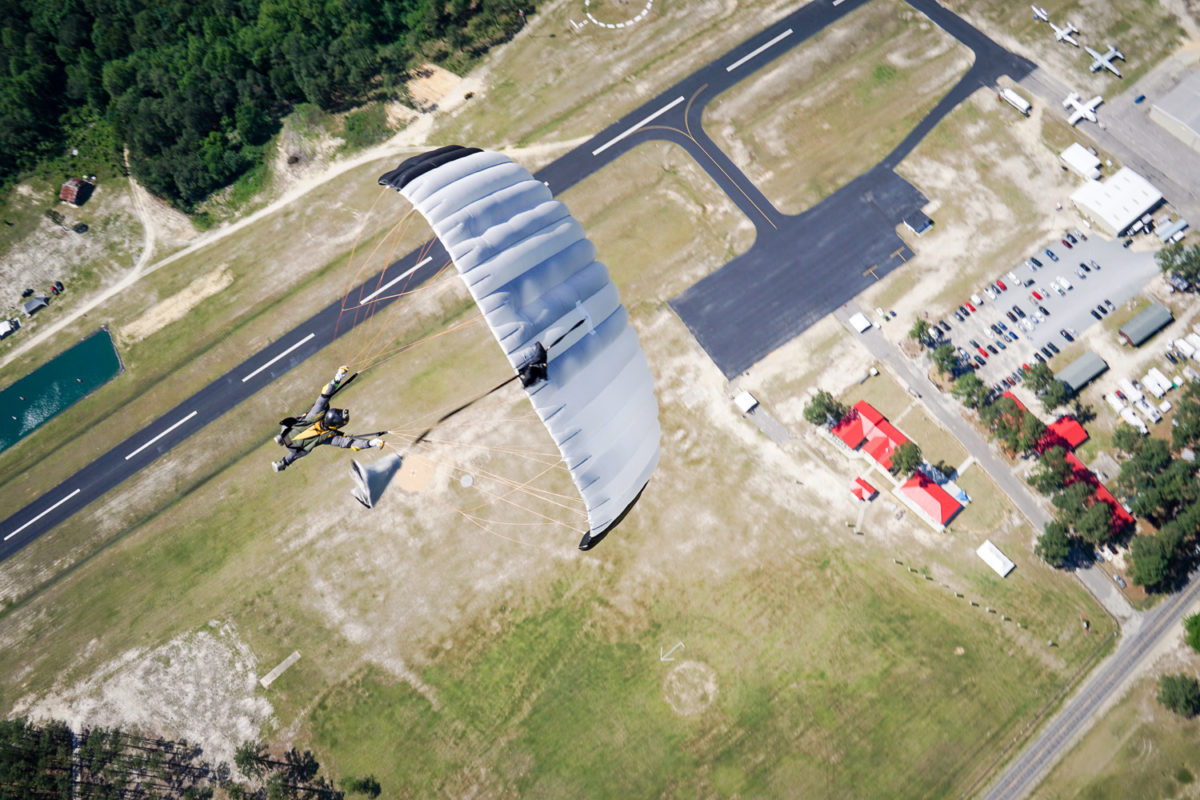 USPA Certified – USPA is the acronym for the United States Parachute Association, the national organization and the governing body for skydiving. USPA has guidelines and recommendations for skydiving centers, as well as its members, and instructors. USPA Certified simply means being trained under those guidelines in earning a basic license or instructional rating such as Coach, AFF or Tandem Instructor.

Turbine Aircraft – you’ll see this on our website and definitely hear jumpers talking about our aircraft fleet. And we’re pretty proud of this fleet. Skydiving can happen out of a myriad of different aircraft ranging from a Cessna 182 to the old novelty DC3 warbirds. However, in skydiving, many skydivers enjoy a fast ride to altitude with plenty of room to jump with their friends.  The most practical aircraft for those needs is a turbine-powered plane such as the Cessna Caravan, Twin Otter or Skyvan.

Manifest – the dictionary states that ‘manifest’ used as a noun simply means a list. In skydiving, manifest not only means the list of jumpers on a plane, but depending on how it’s used, can also mean the act of going to the office to put yourself on said list, or simply where the list is being made. As a newbie, manifest is where the office is, and the office is where you’ll register for your jump.

FJC – this is an acronym for First Jump Course. I know, you’ve already made a tandem skydive, or two, but this is an old skydiving term from back in the day that has stuck. So the way we describe it is, it’s the training for your first solo jump.

PSP – every USPA Group Member is required to follow minimum standards for their student training, usually called AFF (or Accelerated Freefall). Here at Skydive Paraclete XP, we have developed our own training that goes above the industry standards called, PSP, or Paraclete Student Program. 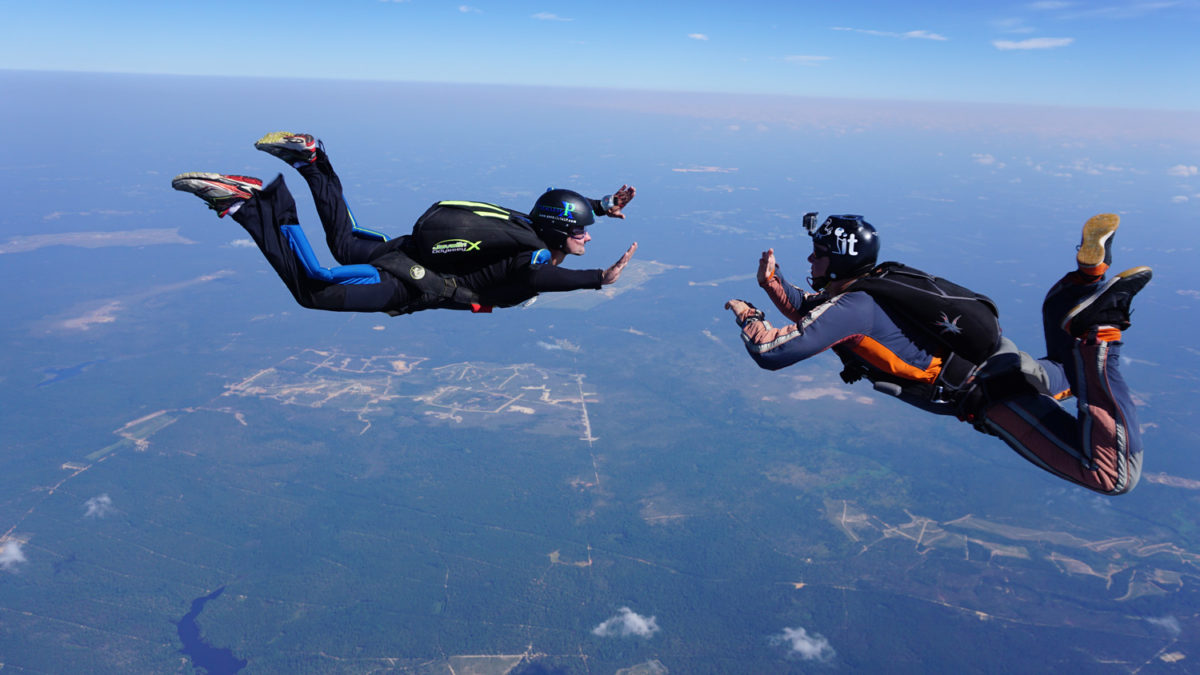 A, B, C, D License – this refers to USPA’s license system that dictates what sort of skills you’ve attained in freefall and canopy control at a certain point in your progression

Wind Tunnel – aka Indoor Skydiving. Indoor skydiving is just that, a confined tube of air for freefall simulation. Or in skydiving slang, the ‘windy tube’! We are one of the lucky ones to have an outdoor and indoor skydiving center within miles of each other!

AAD – Automatic Activation Device. These are incredible pieces of technology for the sport of skydiving as these units are set to deploy the reserve parachute if the opening altitude parameters are not met. These devices have saved over 3,000 lives!

Ram Air Parachute – this refers to the design and function of the parachute. Today’s parachutes are designed more like a wing of an airplane with a bit of forward descent, and better maneuverability – hence ‘ram air’. The round parachutes back in the day were round, not easily steered and more like an umbrella!

Vertical Formation Skydiving – or VFS refers to a body position in a vertical orientation, or simply flying head or feet to earth

Canopy Piloting – or CP refers to flying high-performance parachutes in a controlled manner at high speeds (a little back-in-the day slang, we used to call it swooping because the jumper would literally swoop their parachute above the ground)

Load Organizing – or LO refers to an experienced jumper coordinating a choreographed jump with others of a similar skill level. AKA, a jumping buddy!

Here at Skydive Paraclete XP, we train first-time skydivers all the way to champion skydivers. With your new-found vocabulary, you’ll sound like a pro in no time! And we look forward to welcoming you to the exciting world of skydiving!

This is where I got my start, and roughly 4800 jumps later, I continue to send people there from all over the place...the facilities a great, the people are Fab. and the STAFF...Top Notch!! The Grounds are the best kept in the sport.