First of all: What is BASE jumping?

In a single word, BASE is…an acronym! (Maybe that sounds weird, but so is the “scuba” in scuba diving.) Those four letters stand for the names of the four objects most often used by BASE jumpers as, quite literally, jumping-off points: buildings, antennae (as in radio antennae and power towers), spans (which is actually just another word for bridge) and earth (but not just any earth: dizzyingly high, vertical cliffs).

First difference: The number of parachutes.

BASE jumpers use a single-parachute system. It looks like the backpack (“container”) that contains a skydiving parachute, but it’s significantly simpler. This bit of kit is not approved by any oversight organization — it’s just the result of the intervening years of development that have passed since people first started BASE jumping sometime in the 1980s. There’s only one parachute because the few seconds of freefall that BASE conveys don’t allow for the time it would take to cut away and deploy a reserve. There’s simply not enough time for backup emergency procedures. If it doesn’t work, you’re living (or otherwise) with the consequences.

Skydivers, on the other hand, have two parachutes. A skydiving “rig” has a main parachute and a reserve parachute, as well as, in almost every case, an automatic activation device that deploys the reserve parachute in case the skydiver loses consciousness. All the skydiving parachute systems in the air are overseen and approved by the FAA, which means that all reserves are opened and repacked on a regular schedule by FAA-certified riggers. If that sounds serious, it is! Skydiving safety is incredibly important, and this kind of high-level hoo-hah over equipment helps keep our skydiving safety statistics in top form. 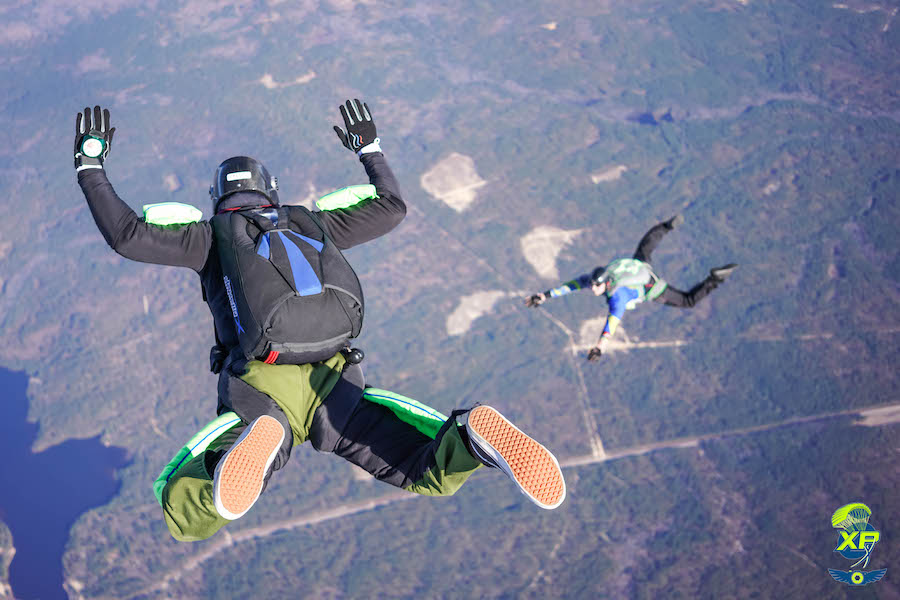 Difference two: The margin of survival in BASE is WAY less.

Skydivers jump with altitude-measuring devices because they have some altitude to play with. BASE jumpers don’t jump with altimeters. They have hardly any freefall at all to play with in order to establish proper body position and heading (mostly, in slippery-feeling “dead air”) before deploying a parachute. Because the margins are so tight, a smart BASE jumper has to measure up all kinds of conditions before choosing to make a jump: weather conditions, emotional conditions, physical conditions, equipment conditions, conditions of legality, and so on and so on. There are about a million variables to adjust for.

The “legality” thing is sticky, as you might imagine. Some BASE jumpers choose to jump from objects that have to be accessed illegally (a practice we very obviously don’t recommend), so they’re worried about security guards and police officers as well as the technical elements of the jump. Quite literally all BASE jumpers jump into landing areas that serve more than that one purpose. Pretty much all of these feature some perilous combination of fences, power lines, animals, children, crowds, moving traffic and enforcement personnel. The challenge is nerve-tickling, but not everyone is up to it — not all of the time.

Heck yes, BASE jumping is a thrill. It makes for a good video (at least sometimes). And there are thousands of BASE jumpers who survive to enjoy that particular brand of thrill repeatedly. Plenty of other very smart, very talented BASE jumpers, however, do not.

While Skydive Paraclete XP counts quite a few BASE jumpers among our extended sky family, we neither offer BASE jumping instruction nor do we particularly condone the practice. That said: learning to skydive is the starting point of every BASE jumping career. If you ask any BASE jumper with a meaningful career, that person will tell you that the more skydives you make, the longer and less-injury-prone that BASE jumping career is likely to be. The best advice is this: Starting the skydiving chapter of your life at a great dropzone is the healthiest initial step in that direction. We’d be honored if you’d start yours with us! Give us a try.