Heather Wolf and Shawnna Maxwell are friends from opposite sides of the country united by some pretty unique similarities. They share an uncanny resolve, personalities that emanate positivity, and they each decided that talk is cheap and chose to make their way to Raeford, North Carolina to experience freefall from 13,500 feet at Skydive Paraclete XP. But, for Heather and Shawnna, the desire to take flight, a long drive, and the bravery it takes to make the leap are not the only things they have in common. During the day, each of these two remarkable women must also navigate the world without the aid of all their senses. 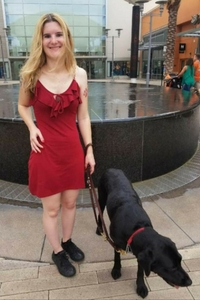 Shawnna, originally from Las Vegas, Nevada made the trip to North Carolina a few weeks ago to visit Heather and other friends. The group had been toying around with the idea of making a jump, and Shawnna, acting on the fly, was determined to turn talk and intention into action and make a skydive. Like most of us, though, Shawnna was a bit unsure if she would be able to muster the courage to complete a skydive, but filled with determination, she decided she was going to rise to the challenge and make the leap.

Shawnna is no stranger to determination or bravery for that matter. At only two and a half years old Shawnna began losing her vision to pediatric cancer, and now, has lost vision completely. But, she certainly doesn’t let that stop her. When asked how it affects her day-to-day, she says “I don’t allow it to affect me. I still do what everyone else does. I don’t let it affect me at all.” Except, that this remarkable woman does what not everyone has the courage to do—and took the leap from 13,500 feet with her trained tandem instructor Phil. Now, not every family would be supportive of such a ‘risk’, but her family knew better. When asked how she broke the news to her loved ones that she was going skydiving and what her family thought of her choice to skydive, Shawnna says “I texted my family when I was pulling into the parking lot. I sent out a chain text to the family to let them know…They were excited for me. They were all super supportive and said how I was brave and I don’t let anything stop me. I think my family likes that—how I don’t let anything stop me.” Her experience at the dropzone was just as pleasant: “At the drop zone, I honestly had crazy thoughts going through my head, but everyone was so nice and friendly and something about the atmosphere made me feel more comfortable and got me to chill out.”

The positivity of the staff around her helped her to feel empowered. 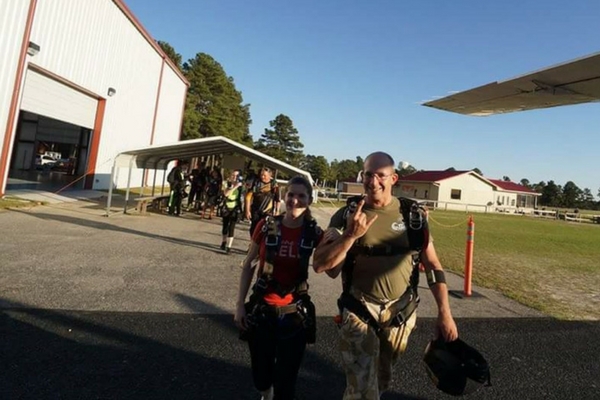 “They made me feel like you know what I can do this. The instructors and camera guys were pumping this up even more. I jumped with Phil- it was a lot of fun. He was saying stuff to scare me more. But I already knew deep down inside, I had my trust in him. It was a lot of fun, and they literally turned a scary thing into something really fun and exciting. At altitude, when we were jumping I thought, I’m doing it now-it’s too late. So everyone was great. The instructor Phil did really well with me.  For [an instructor] who it was their first time jumping with someone visually impaired, he was really thorough. And he knew how to help me, but he didn’t go overboard. And he was perfect. He did everything he could to make it comfortable. When I left the plane my adrenaline went from 0-100 so quickly. It was a rush- it’s crazy to explain it. You don’t have time to think anything through once you’re out of the plane. Once the rush of freefall was over- I liked [the ride under] canopy. it was nice and chill to just be up in the air swinging around. It was really cool and relaxing. [I thought] I could do this all day.” 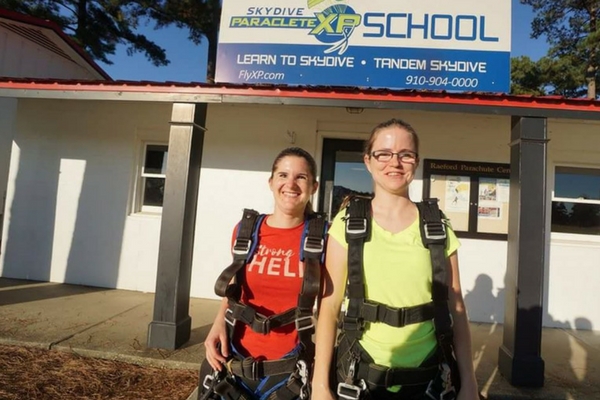 Before the question was even posed if she would like to do it again, Shawnna responded “I want to go back and I am so eager to jump again. And I definitely will, I already bought my next jump.” The reason, other than the adrenaline rush that Shawnna can’t wait to make another jump:  “Skydiving made me realize even more because I did that- I faced a huge challenge I can really do anything. Nothing will stop me.”