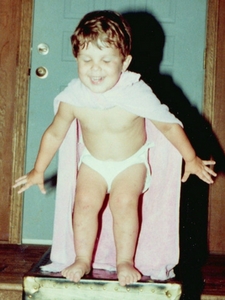 Paul grew up like a lot of us – wanting to fly like Superman. Over the years, he never lost his fascination with flying and one day, after seeing the 1990’s iconic movie, Point Break, he decided he wanted to give skydiving a try. But one thing stood in Paul’s way from making his dream a reality – his weight.

Throughout time Paul accepted the fact that he may never try skydiving, but he never gave up hope. He randomly found a place that would take him and when he landed, he knew he had to find somehow to make this a part of his life. His mission: save money and lose weight!

Here is more of Paul’s story:

Where are you from & where do you live now?

What do you do for work and how long have you been in that profession?

Do you have any hobbies (besides skydiving)? What are they?

My other hobbies include snow skiing, motocross, and scuba diving.

When were you first exposed to skydiving and what inspired YOU to want to jump from a plane?

Point Break, in the early 90s, was probably my first exposure to skydiving. I’ve always dreamed of flying since watching Superman, my first movie as a small child.

What did your family think of you wanting to skydive?

They were all very supportive, especially my wife Betsy. 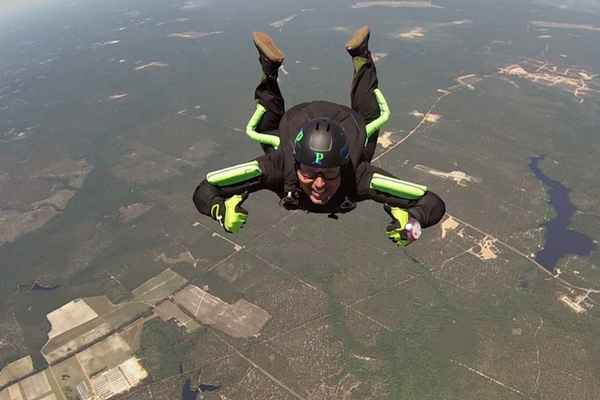 Most people would get discouraged when they found out they were over the weight limit to skydive. How did that affect you?

I’d been over the weight limit for skydiving most of my adult life and had just accepted that I probably wouldn’t be able to try it.

How long did it take between when you first inquired about skydiving to making that first jump?

I first inquired about skydiving in 2003 and did my first tandem over 12 years later. While in Florida on business with a day off, I was shocked to find a dropzone that would take me up on a tandem. I drove there the next morning and spent 6 hours on a cloud hold until my first jump.

The tandem freefall was the most peaceful and unexpected feeling I’d ever felt. The canopy ride was an entirely different, thrilling experience and the visuals were amazing. I couldn’t stop thinking about it for the next several months. I watched almost every skydiving video on Youtube since then.

Did you know when you landed you wanted to get your A-license? Or did you know that before making your first jump?

After landing I knew I had to get licensed so my wife and I set up a skydiving savings account to prepare for it financially and we developed a plan to lose the weight.

What did you do and how long did it take you to lose the weight?

I cut out processed foods, hit the gym, started yoga and spinning classes, and joined a Muay Thai kickboxing school. I lost 40 lbs over several months. I then visited Skydive Paraclete XP and was told that I needed to lose at least 15 more lbs. The same day while in Raeford I tried out the wind tunnel for the first time and reinjured my shoulder which had a prior history of dislocating. So I went home, had the shoulder surgically repaired, lost 35 more lbs and came back 6 months later.

In short, describe highs and lows of the A-license progression, and how did you overcome your challenges? 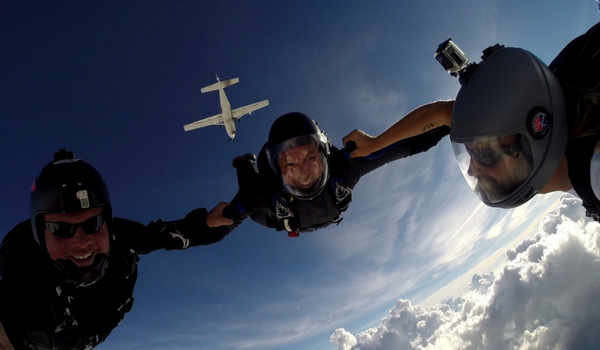 What are your goals now that you’ve earned your license?

I hope to experience as many of the different skydiving disciplines as possible and to progress at a rate that will allow me to keep jumping for as long as I’m breathing. I would love to be able to eventually become an AFF & Tandem Instructor to help spread the joy to others.

Is there anything else you would like to say?

Don’t wait as long as I did to try this sport. It was motivating and life-changing in an entirely positive way. Since that first tandem jump my wife and I had our first child, we adopted a new healthy lifestyle, I lost 75+ lbs, had my shoulder surgically repaired, and we saved up enough to cover the A-license course, a couple hours of tunnel time, and my first rig.

I’d also like to say thank you to everyone at Skydive Paraclete XP and the Paraclete XP tunnel who helped me get started and feel welcomed in this incredible sport: