Earning A Slot To The Next World Championships: The Story Of Phoenix XP 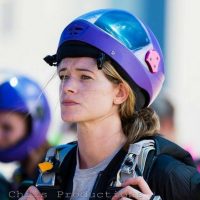 Lauren Byrd has a dream. She wants to be a world champion skydiver. Realizing her love for the sport and seeing the importance of goal setting, Lauren put together an opportunity of a lifetime creating an all women’s 4-Way FS team called, Phoenix XP.

Back in 2011, Lauren made her first skydive at a small skydiving center and earned her license. Like most new skydivers, she wasn’t sure what the next steps were. She was invited to the Carolina Skydiving League [CaSL], a local skydiving league with a focus on the rookie class. Her first one was in 2012 at Skydive Paraclete XP with a few friends to form a rookie team.

Their first few meets were a struggle as the team tried to figure out basic team dynamics and essentially scored zero points in the beginning. However, they decided to band together for more training in between meets and saw immediate improvements at the next competition. At the end of the year, the team won the title of “Most Improved”.

Something came alive within Lauren as she saw measurable improvements and she was instantly captivated. “I like to have goals. I think without them, things get boring and I’m not sure I would have stayed in skydiving if it wasn’t for 4-Way,” says Lauren.

Lauren was committed. She started training on a 4-Way and 8-Way and has racked up an incredible resume for being considerably young in the sport. Over the years at the USPA Nationals, her teams have won:

At world level skydiving championships, there is an all-female category for the 4-Way FS discipline. After winning the 2016 World Championships last year, the USA’s team had disbanded. Lauren was inspired not only by the former team’s success but also to fill the gap. Therefore, she held tryouts to form a new all women’s 4-Way FS team.

After the tryouts and training camps, the team had decided on: Amanda Lampton (flying outside center), Christine Bruchac (flying inside center), Morgan Womble (flying point), Lauren (flying tail), and Lauren’s husband, Elliot flying camera. These are the members who make up the new team, Phoenix XP.

“In Greek mythology,” Lauren explains, “a phoenix is a bird that is reborn by arising from the ashes of its predecessor. We thought it was appropriate, given the nature of this opportunity. That, and phoenixes are badass!”

Since committing to the team, the ladies have already done several skydiving and indoor skydiving training camps with world champion skydiver, JaNette Lefkowitz. Their first showing will be at the USPA Nationals later this year at Skydive Perris where it will be determined if they earn a chance at representing the US in the all-women’s 4-Way FS category.

“Our team is friendly and approachable. We love competing and hope to empower the women in our sport.” Lauren states. Phoenix XP is already gaining momentum and support from the community.