Round parachutes? Oh heck no. Mid-freefall conversations? Not even gonna happen. Rip cords? Yeah–that’s not a thing either, anymore.

Hollywood is probably to blame for many of the myths about skydiving that still make the rounds. After all, movies still don’t really make distinctions between our sport’s multitude of disciplines (which is sort-of like confusing sprinting with long-distance running with the long jump)–and they get the lingo all wrong (hint: we never, ever, ever refer to our “chute”)–and they insist on making us all “adrenaline junkies” (*sigh*).

Wanna know what’s actually real skydiving and what’s uninformed screenwriting? Lean in a little closer and we’ll clue you in.

MYTH: Everyone Falls At The Same Speed, So You Can Have Long, Face-to-Face Conversations About Pulling Vs. Not-Pulling In Freefall.

In this digital age, there is much to be said for a deep, face-to-face conversation. You are not, however, going to have that heart-to-heart chat in freefall.

Average freefall speed clocks in at around 120mph. However, a number of factors affect each tandem pair’s actual fall rate: most noticeably, the weight of equipment, the amount of drag resulting from the jumpers’ clothing and the surface area facing down.

Heavier humans? Heavier equipment? Faster fall rate, as you might imagine. (Lighter sport skydivers often wear weight belts to keep up with their more formidable jumping buddies.) Loose clothing? More drag? Slower fall rate. (Like: If you were to put on a sports mascot costume and jump, you’d be moving like relative molasses.) Finally: surface area. As a tandem, you’ll be making a belly-to-earth skydive, so the surface area will be the largest, slowest possible. Once you start sport skydiving (‘cause, y’know, you will), you can learn to freefall in a sitting position or go head-down, both of which move significantly faster in the downwards direction.

MYTH: …About That Conversation.

The original ‘Point Break’ made a lot of people believe that conversations in freefall were possible in reality. Seemed legit, right?

We do communicate up there, but it’s done with hand signals (and some ineffective flailing, where it seems apropos).

Movies still bring up rip cords with some regularity–which is shocking, because they haven’t been in regular use in sport or tandem skydiving for a long time. If you’re at a dropzone that uses ripcords, beware: there is sketch occurring in the present. 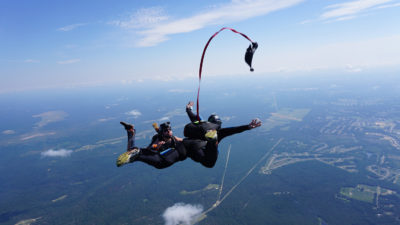 Skydivers of the modern age use a pilot chute instead. The pilot chute, or “P.C.,” is a little bitty parachute that lives in a pouch on the bottom of the container and is accessed by pulling the round ball that’s securely attached to its center. The little parachute is attached to a bridle that pulls the container’s closing pins, quickly releasing the parachute. If you want to be yammered at about the multitude of ways this is better than a rip cord, just ask. We’ll be happy to explain.

Which leads us to the moral of the story: Don’t be shy! We love to debunk myths, answer questions, and generally wax rhapsodic about the little universe that is the sport of skydiving. If you’re curious about something, just let us know–we’ve almost certainly heard it before, and it’ll be our pleasure to educate you.

Oh, and by the way…there is one myth about skydiving that’s true:

Skydiving is synonymous with awesome.

True story. Come and see for yourself.

For more information on skydiving North Carolina with Skydive Paraclete XP, view our tandem skydiving page or contact a member of our team at 910.904.0000.