The technology behind skydiving has evolved to make our sport safer and more scientific than ever before. Thanks to a range of developments over the years, we’re able to automate parachute openings, track our movements and lots more.

Here are just some of the ways the technology behind skydiving has evolved and how we use it here at Skydive Paraclete XP.

It’s worth noting here that all skydivers jump with two parachutes; a ‘main’ and a ‘reserve’, and these will be referenced here.

One of the most important safety innovations in our sport’s recent history is that of the AAD. This small device comprises an 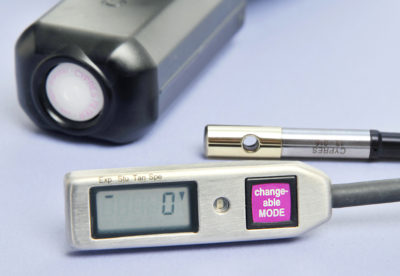 electric charge and a cutting blade, which enable our parachute to be automatically opened in the event we are unable to open it manually.

This works through air pressure, which denotes the speed of descent at any given time. The device is programmed to recognize altitude and when a skydiver is falling at a freefall speed when they reach an altitude where it is unsafe to still be falling, the AAD ‘fires’ and the reserve parachute is released.

The most commonly recognized manufacturers of AADs are Cypres and Vigil.

Both of these innovations have made the deployment of the reserve parachute much faster, meaning skydivers are back under a fully functioning parachute quicker than ever before.

A digital altimeter is a device worn by skydivers, usually on their left hand, which shows them their current altitude. By providing them with a digital reading rather than analog, this device gives a much more accurate reading.

Audible altimeters fit inside the helmet of the skydiver and can be set to make a noise at certain altitudes. This enables jumpers to ensure they have a clear reminder of their altitude at key stages in the jump such as the ‘break off’ point and deployment altitude.

The design of the parachutes we use has evolved over the years and continues to evolve to this day.

In the early days of skydiving, round parachutes were commonplace. These were difficult to control and steer, and typically

quite challenging to land, too! But they were very consistent in the way they opened and are still used by some military today.

Far more common today is the square parachute or Ram Air design. This is a rectangular parachute design which gathers air in it through openings in the front as the parachute flies. This air is effectively ‘rammed’ into the parachute, giving it a rigidity and making it an ideal wing shape to get skydivers safely to the ground while allowing them to steer and control their descent rate.

There have been lots more technological innovations in skydiving, designed to make us safer, help us approach our sport more scientifically and ultimately keep us having fun.

If you’d like to learn more about skydiving technology and how skydiving safety has evolved over the years, read our blog post on How Risky Is Skydiving. Or, if you’re ready to make a jump, click the button for more information.