In an expansion spanning more than a century, skydiving territory has been pioneered by countless brave men and women. As you can imagine, a few of these individuals gain intrigue and fame along the way; because of these famous skydivers, we can enjoy the sport today.

According to data received by the 2018 annual skydiving survey, conducted by the United States Parachute Association, the current skydiving gender breakdown is 87% male, 13% female. Despite the disproportionate gender distribution, famous female skydivers are not hard to come by. In fact, some of the groundbreaking developments in skydiving history can be attributed to women. Let’s take a look at a few of these past and present famous female skydivers. 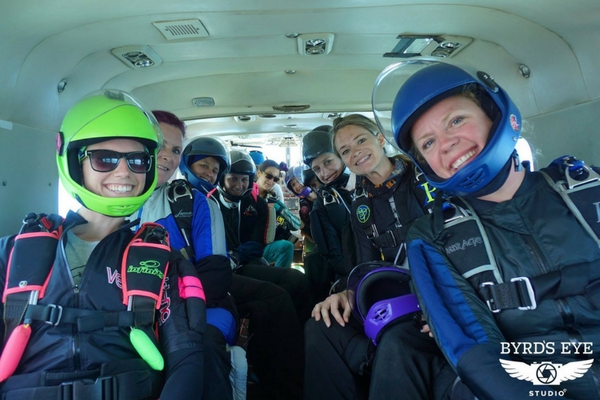 As the name suggests, Tiny Broadwick (born Georgia Ann Thompson) was a famous female skydiver famed for her diminutive stature. A North Carolina native, Broadwick made her first jump from a hot air balloon during the 1908 North Carolina State Fair. In 1912, she earned her fame by being the first female to parachute from a plane. Just two years later, in 1914, during a demonstration for the U.S. Army — to showcase parachuting as an effective method of escape for pilots in failing aircraft — Broadwick’s static line became entangled in the tail assembly of the plane. In order to free herself, she cut the line and deployed her parachute manually. In light of other accomplishments, this may be the one that cements Broadwick’s status as a famous female skydiver. After all, she was the very first person to deploy a parachute manually. Talk about a real pioneer.

Kathe Paulus makes our list of famous skydivers because she invented the piece of equipment that makes it possible to skydive — the folding parachute! Paulus was more than an inventor, as she also accrued over 165 parachute jumps throughout her lifetime.

While clearly not a person, Project 19 is the culmination of several famous female skydivers. As a homage to the 19th Amendment and the fight for women’s equality around the globe, Project 19, supported by the Women’s Skydiving Network, aims to build a 100-way Women’s Vertical World Record.

It’s also the first time that a world record 100-way attempted has been fully sponsored. In order to get off the ground, the project involves several famous female skydivers from around the world. A few of these notable women and record organizers are Sara Curtis, Amy Chmelecki, Domi Kiger, Anna Moxnes, Sharon Har-Noy Pilcher and Melissa Nelson-Lowe. To learn more about these women, check out Project 19/ Women’s Vertical World Record on Facebook.

What about you, sitting at home and scrolling through your phone? Are you our next famous skydiver? We all started with just one jump, so schedule your skydive with Skydive Paraclete XP today!

I did my fist tandem jump yesterday with Jon. It was one the best things I have ever done in my life. I wish to thank everyone there for their professionalism and yet you made it so much like being a part of team and a family.