What A World Meet That Was! Lauren Byrd Tells the Story

Truer words were never spoken. Lauren and her team, our very own Phoenix XP, didn’t just have to imagine that distance. Indeed, they packed their bags and braved that epic jetlag to represent the USA at this year’s FAI World Parachuting Championships. The destination: Queensland’s legendary Gold Coast. The category: All-womens’ 4-way FS. The team may have missed the podium by the very skin of their teeth, but a good time — and plenty of growth — was had by all. 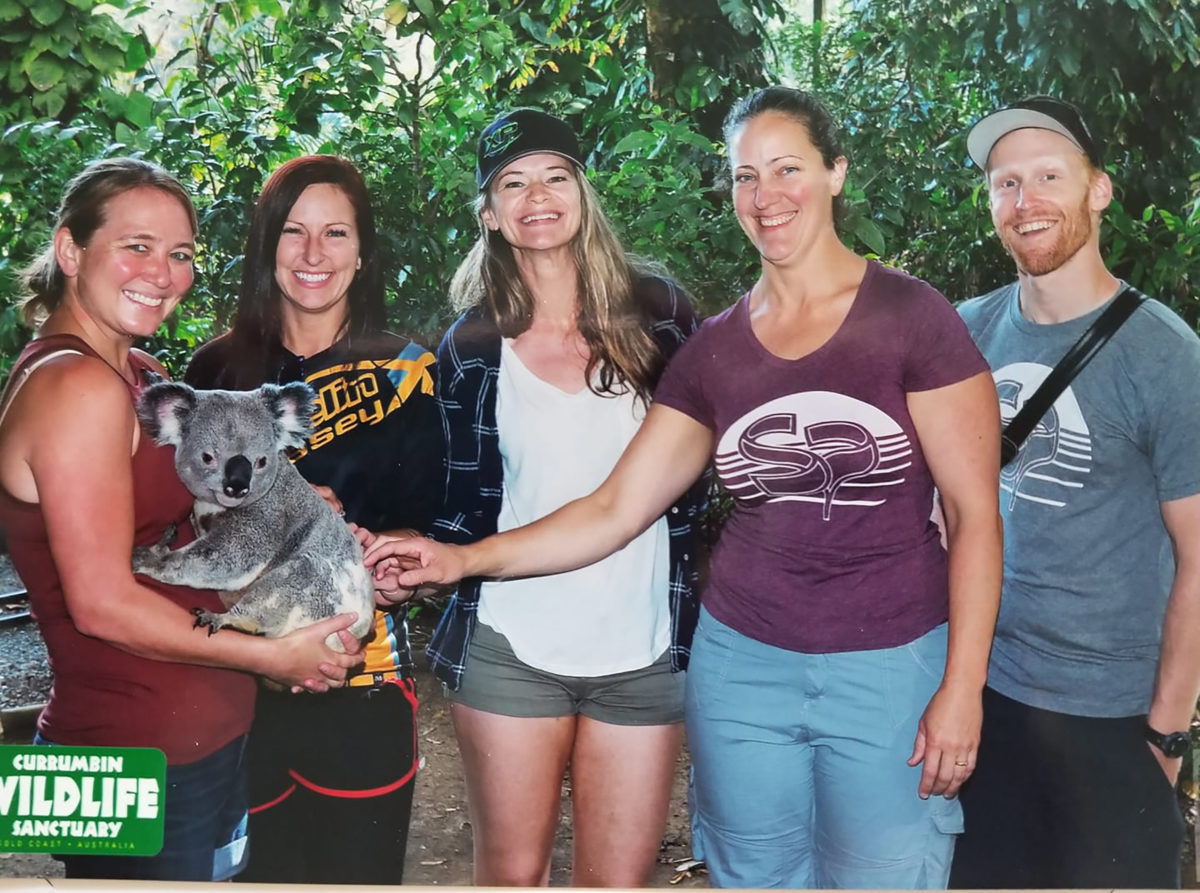 “This was my first international competition,” Lauren starts. “I had done a few events in the past that had a more international environment, and it was really cool to be able to see those people again — people I hardly ever get to see, from countries all over the world. It’s interesting to realize that, in the US, we have a small, everybody-knows-everybody type of community, and it’s much the same at the international level.”

Thank goodness for homey, comforting similarities in community. Australia’s dissimilarities — specifically, in venue, from Phoenix XP’s North Carolina home here at Paraclete — were going to present a steep learning curve for our intrepid adventurers. (Case in point: no less than a 13-hour time difference.) Ever the heads-up planners, Phoenix XP arranged to arrive in Australia a week ahead of time so that the insomnia monster wouldn’t take a bite out of their scores.

“It is the worst jet lag I have ever experienced,” Lauren admits. “Whatever time of day it is back home, it’s exactly the opposite in Aus. Luckily, we only had to really worry about our teammates and gear. The USPA supports the US team a lot, and took care of a lot of the logistics — like our accommodations, and rides to and from the airport — which made it a lot easier. We were really grateful for that.”

The USPA put Phoenix XP up at the Intercontinental at Sanctuary Cove.

“It was a really nice resort,” Lauren smiles. “Very, very nice. We were happy to be spoiled at our first world meet.”

After the opening ceremony, of course, the kangaroos and koalas were shuffled off center stage. It was business time. The team settled into their new home-from-home: a team tent at one of the competition venue’s three locations. The comp took place at a pop-up dropzone, so normal DZ infrastructure was notably absent. Phoenix XP’s home base — alongside all of the other teams’ tents, where the team was to spend most of its time — sat completely separate from the airstrip, which in turn was completely separate from the landing area.

“That kind of setup really limits how much you can do in one day for training,” Lauren notes, “but [the event organizers] did an amazing job getting everything to run smoothly, considering.” 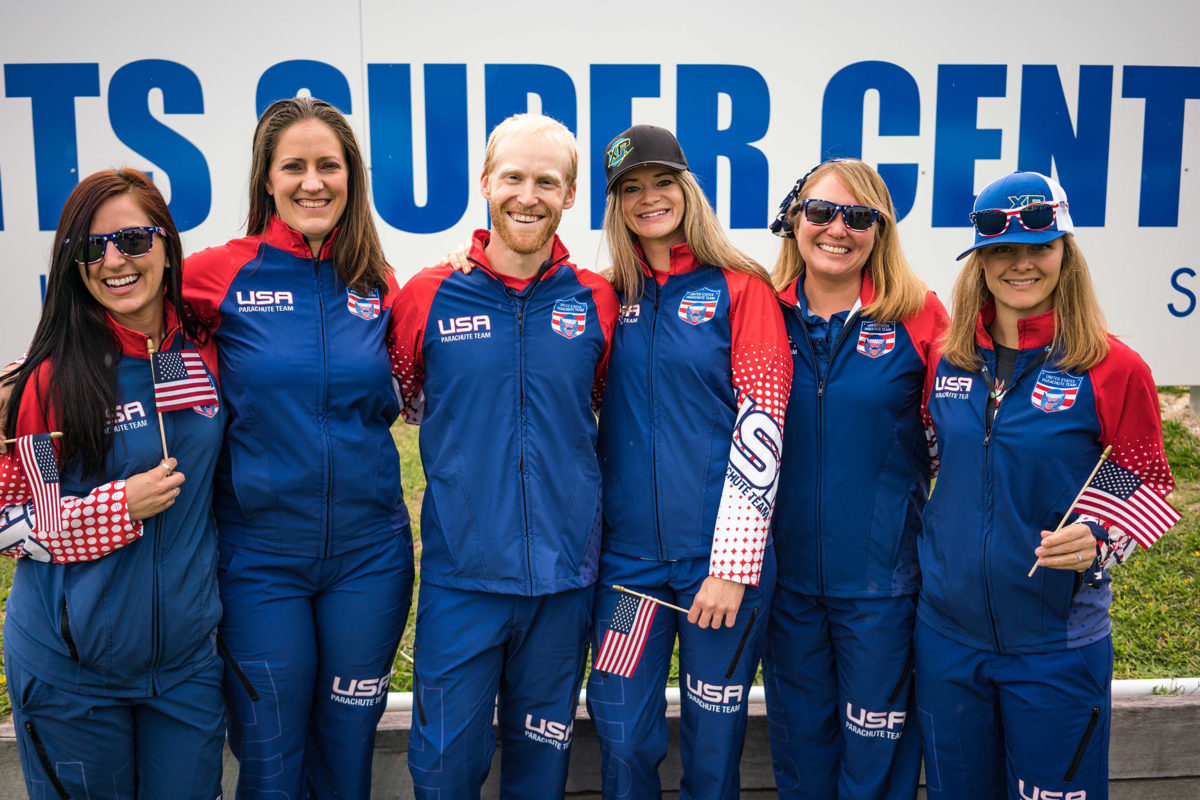 There’s a running joke about Australia that everything there desperately wants to kill you (including enormous killer birds, the world’s most venomous marine creature and 21 of the world’s 25 most deadly snakes). Apparently, landing areas are no exception. The comp was held in a very urban environment, chock-full of obstacles of all kinds. The landing area was large, but the surrounding landscape was nail-bitingly bereft of attractive outs.

“The video they put together to highlight the outs was so terrifying it actually made me laugh,” Lauren remembers. “All of the out landings were extremely small and very, very far apart. Then they were recommending that you land in the street rather than the canal. We tell our students, of course, that landing in water is better than landing on a street, right? Well, there are bull sharks in the canals there, so the street is safer.”

As luck would have it, Lauren and her husband-teammate Elliot — both of whom jump high-performance canopies that need a lot of space to land — got to find out for themselves, on the team’s very first training jump.

“The planes there are a little different than we were used to,” Lauren retells, “So a lot of the teams were taking longer at the door.  We ended up very far out, and my husband and I had to land in the backyard of a school. It was definitely intimidating.” (At least it wasn’t on a busy city street or rock-hopping the backs of hungry bull sharks, we suppose.)

Weather was a challenge, too. As the competition ramped up, the weather started to shut down. Rain and winds complicated the situation. For that final round, a solid cloud layer formed between 4,000 and 7,000 feet, making spotting out of the aircraft a total impossibility.

“We were waiting for ages to go up for round 10,” Lauren remembers. “We just had one more round to get done, and we just so badly wanted to knock it out. The wait had created an enormous amount of build-up and anticipation. Finally, they decided to put us up regardless. The pilot gave us extra altitude so we wouldn’t have to worry about working time. We just trusted the spot and went for it.”

“It ended up being a very energetic — maybe sloppy — final round, but I can definitely say we put it all out there,” she says, “which was our goal. We really had nothing to lose at that point.  When you’re down by a few points, really the only option is to go for it.”

“If I were advising anybody I was coaching or instructing, I would never in a million years have told them that was okay,” Lauren laughs. “But this was a world championship — completely different rules.”

At the end of the day, Phoenix XP gave everybody one hell of a run for their money for this, their very first international competition, which turned out so thrillingly close at the end. Lauren is already excited for the FAI Mondial to be held in 2020 in Tanay, Siberia.

“My excitement going into this event was knowing I’d be coming home with the experience of having competed in a world meet,” Lauren muses. “I felt, of course, unprepared, because I didn’t really know what I was getting into. There was so much to learn. For instance: the experience of getting to know your team better in a competition environment. Sometimes people need to go off and do their own thing, and sometimes you need to rally as a team and put your heads together.”

“Even knowing what music to listen to was a lesson to learn,” she adds. “A lot of us on our team, if we’re on a weather hold, will have our earbuds in, listening to music. Just knowing what music gives you the optimal arousal level for competition is great information to carry forward. When I feel like I need to calm down, I have music for that. On the other hand, if my arousal level is too low, then I’ll have something more upbeat to kick that up a little bit.”

And what’s the magic music for Lauren?

“A lot of Beastie Boys,” she grins.

Phoenix XP will definitely be continuing forward. Not only will you be able to support them at the World Cup this coming fall, you’ll see their smiling faces here at Paraclete — as well as dropzones around the country — as they spread their hard-earned knowledge around the skydiving community as coaches, instructors and mentors. We’re incredibly proud of Phoenix XP, and we’ll be cheering from the front row for all of it.