Andy Plisko Does Nothing Halfway

The first thing you notice about Andy Plisko is the genuine warmth and kindness in his low-key approach. The second thing you notice is that he has managed to keep that humble approach while being a stone-cold badass. Not only does Andy have almost 3,000 skydives under his belt, but he’s also massively multi-rated (Count ‘em: USPA Coach, Coach Examiner, AFF Instructor, AFF Designated Evaluator, Static Line Instructor, tandem-rated on both Sigma and Strong, UPT Sigma Examiner…the works.) With all that, Andy insists that his favorite thing to do in the sky is to coach beginners and give ‘em a strong start in the sport. How cool is that?

Despite how it kinda looks, Andy wasn’t born in freefall. His story started in the coastal hamlet of Havelock, North Carolina. He was raised in that sweet spot of the Atlantic seaboard, in and around Carter County, where his Japanese father had emigrated at the tender age of 16. (Fun fact: Andy’s dad held the record for several years as the youngest person to have a black belt in Judo.) Later, he served in the Army Special Forces. All that stoicism led Papa Plisko to raise Andy and his siblings to be disciplined, sure — but also to shred quite a lot of gnar. 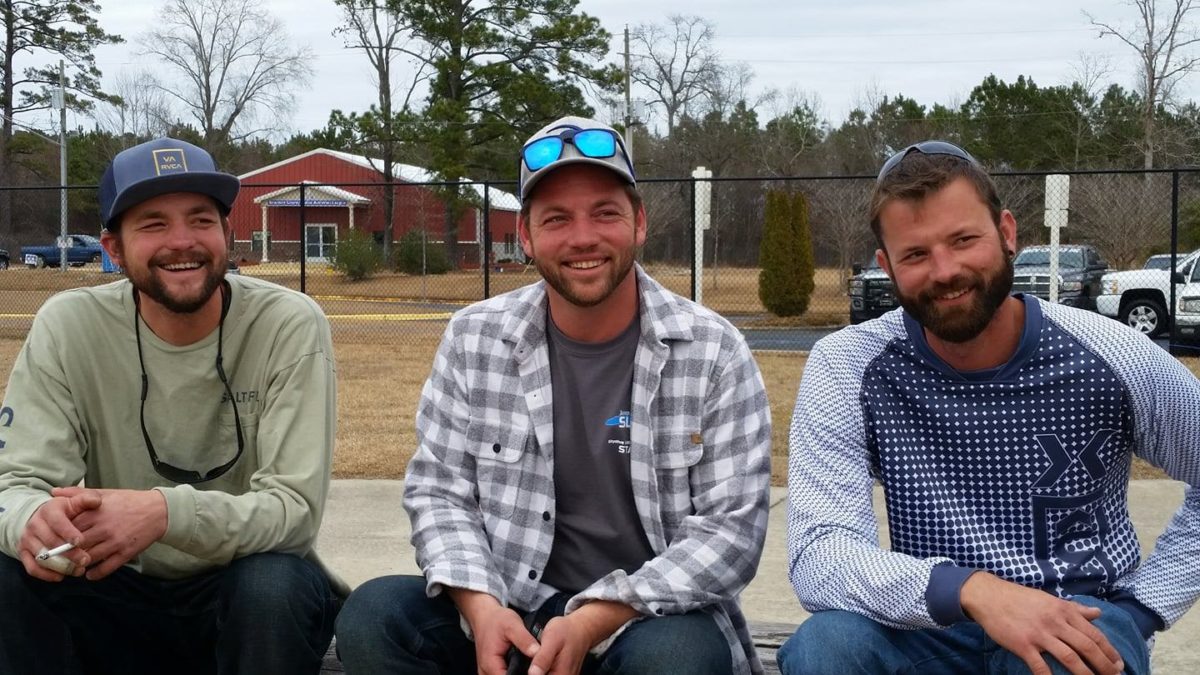 “When he came to the States, he didn’t really fall into the traditional sports,” Andy laughs. “He loved skateboarding, surfing, anything like that. So me and my brothers were all born and raised to be athletes. Before I was jumping, I was a big-time surfer. Surfing; skateboarding; four-wheelers; dirtbikes… I loved anything that would go fast. ”

As time went on, Andy started his own family in coastal North Carolina. He welcomed his daughter Skylar 12 years ago and his son, Hunter, nine. When Andy was 22 (and Skylar just two), Andy enlisted in the US military and was promptly deployed.

“They are getting big,” Andy grins. “Skylar is as tall as I am already.”

Andy was serving in Hawaii when he did his very first skydive.

“It was the typical thing you see at the dropzone,” he recalls. “Me and maybe ten other guys in the military signed up to do tandems, but just me and my buddy actually showed up.”

“I just remember climbing up in the plane and immediately wanting to back out,” he laughs. “When the door came open, I was, like, I am not going to do this. But my buddy jumped first, and since he went, I was like, I have to go. I can’t let him outdo me. So I did.”

I almost puked on the way down because we spiraled the whole way down, and I said I would never jump again.

Andy didn’t jump again until after he got out of the military. His brother, Jeff, had started jumping at Tradewinds Skysports (now Skydive Little Washington). That was all the encouragement he needed. About three years ago, Andy became a full-time skydiving professional. We couldn’t be prouder to have Andy on our staff here at Paraclete XP — and, to hear him tell the story, the feeling is absolutely mutual.

“I can’t even describe how good this place is,” Andy insists. “The core staff — even the people that come on the weekends — how devoted they are. It is the best place to work, ever.  Every instructor there is awesome. Case in point: I’ll start working with a student who has been with another Paraclete instructor for several jumps, but even though I’ve never worked with them, I automatically know they have been taught correctly because everyone here is on point.”

“There is never any panic mode here when it gets busy,” Andy adds. “Everybody is here to work hard and get along with each other. There’s no drama like you see at most dropzones. I don’t know how to describe it — it’s just an awesome place to be.”

Y’know what else is awesome? What Andy describes as his “#1 top jump”: taking his mom out for a tandem jump, with himself as the Tandem Instructor. 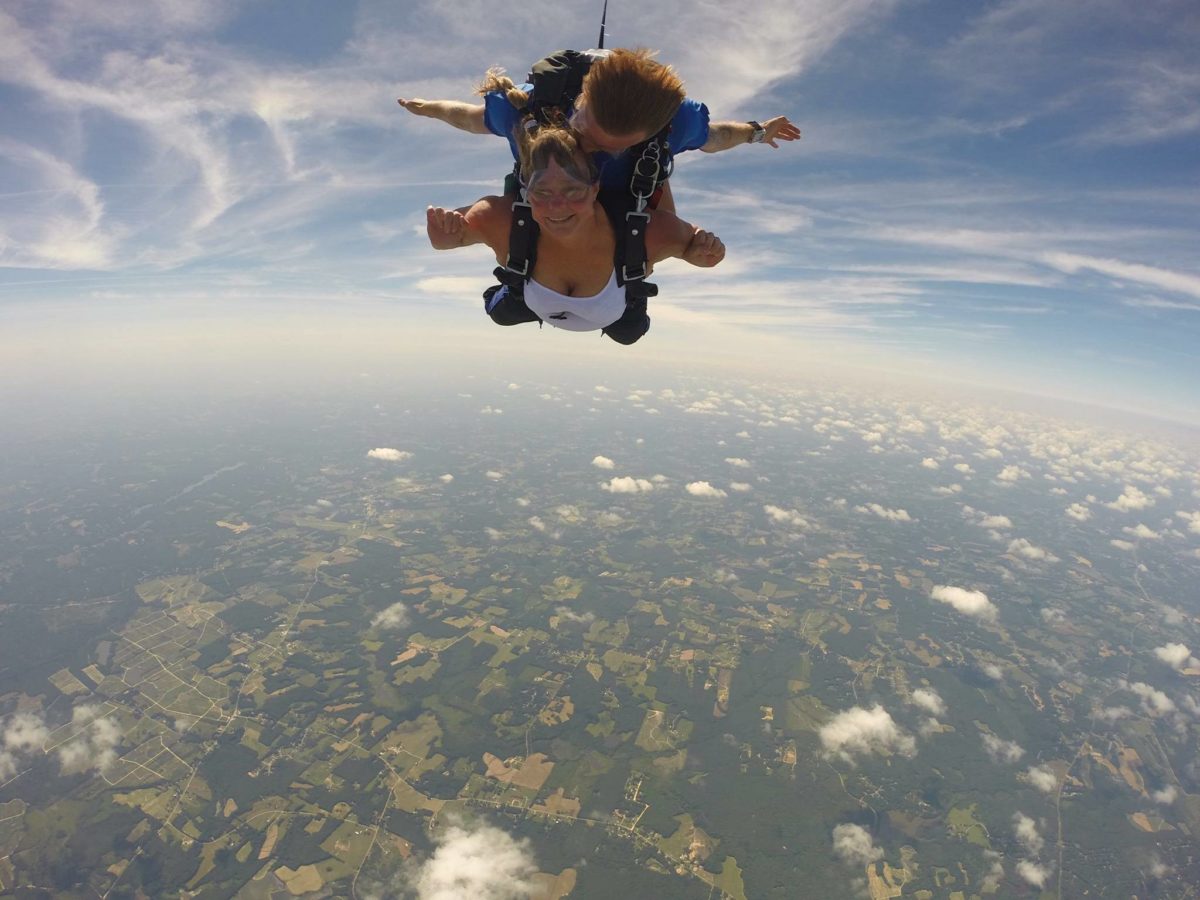 “I took her for my 1,000th jump,” he beams, “It was her third tandem, so she knew what to expect. I knew she liked the canopy ride more than the freefall, so we pulled a little bit higher.  We just had that mother-son moment, just holding the toggles and flying around, talking, enjoying the moment, being up there. She loves the view.”

“I have gotten to jump with all my family members,” he adds. (We’re jealous.)

When Andy’s schedule allows for some fun jumping, he takes after his mom: he loves the canopy ride. His own canopy flights are, predictably, one heck of a lot faster. A consummate swooper, Andy’s 71-square-foot canopies let him execute the kind of zippy, artful descents that wow our spectators.

“If I could choose anything to do on a fun jump,” he smiles, “it would be a high pull with a bunch of other canopies and a nice good swoop at the end of it. That’s the thing that makes me happy.”

Luckily, Andy loves to spread that happiness around. His years of skydiving instruction experience have brought him into the orbit of a great many folks who were looking up with yearning faces but just needed a little nudge to get them on the plane — and he knows just how to do it, in his signature low-key, easygoing way. 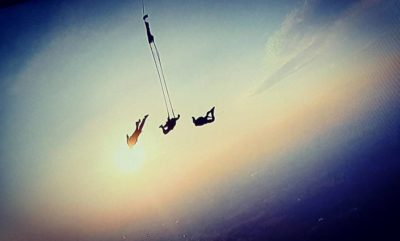 “If they are just thinking about [making a tandem skydive] and they’ve never been to the dropzone,” he says, “I just suggest that they spend the day at the dropzone without even thinking about jumping. They’ll get to watch the tandems get on the plane — scared, sweating — and then they’ll get to watch those same students walk back in from the landing area, smiling and saying that they just can’t wait to do it again. That gets people jumping — just watching that transformation! That’s what got my mom to do it. She was, like, I want to have that smile.  I want to experience that smile that everybody has when they come back.  And she got it. Everybody does.”

“Honestly, Paraclete is the best dropzone there is,” he continues. “It is the best school. It is the best place to train. The environment there is just beautiful. I don’t think I would ever want to work anywhere else. That’s all I can really say about Paraclete — it’s like family.”

We feel the same, Andy!