Like everything in this life that’s worth doing, there’s some risk involved in skydiving. Chances are, if you’re asking yourself that question, you’re looking for a real answer–not just an offhand shrug-off. Good news: while tandem skydiving risks are real, it just takes a quick look at the USPA website–which has faithfully gathered skydiving risk statistics for half a century–to see just how risky modern skydiving isn’t.

Since the sport of skydiving is basically all about taking calculated risks in a way that inspires you and fuels your personal power, we’re really happy you’re asking this question! Here’s the answer, in the most thorough way we can express it.

Skydiving Risks Through The Years

In the sport of skydiving, we’re very proud of our safety record. Skydiving has been a widely practiced hobby since the 1970s, and we’ve made enormous strides since then as far as technology and procedures are concerned.

Back when leisure suits, architectural facial hair and disco were celebrated cultural treasures, the USPA logged 42.5 skydiving fatalities–total–per year. It’s important to note that, at that point, tandem skydiving hadn’t even been invented yet. (That landmark sits squarely in 1984.) That higher number probably owes to the fact that skydiving, in its early years as a sport, relied on its hobbyist jumpers to test the equipment as it was being developed: the “piggyback” main/reserve container systems, square parachutes and electronic lifesaving gadgetry that many of today’s jumpers take utterly for granted. Every jump, in a way, was an R&D jump, and the skydiving risk statistics make that fact rather evident. 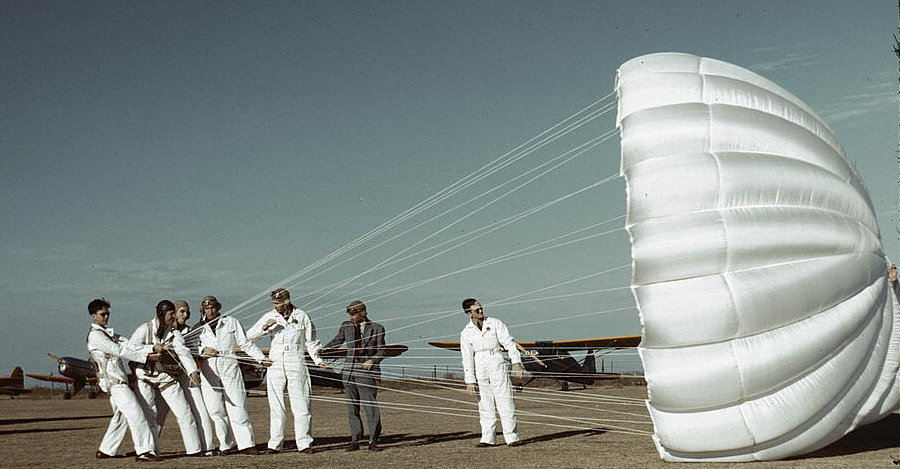 Skydivers, however, are a hardy bunch. Even under the challenging constraints of less-reliable gear, knuckle-biting jump procedures and very little in the way of rules, that 42.5-per-year fatality rate was surprisingly low for the number of total jumps that were made under those gnarly conditions.

If you tear off a bunch of calendar pages, you’ll notice something awesome about skydiving risk: all that amateur “lab work” had a profound effect! The average fatality rate has steadily and significantly dropped with each passing decade. By 2009, that average had plummeted pretty much in half (25.8, if you’re curious).

So, just yesterday–okay, 2015, if we’re being specific–the United States Parachute Association recorded 21 fatal skydiving accidents in the U.S. out of about 3.5 million sport skydives. If you throw that into a calculator, you’ll see that a sport skydiver–someone who throws themselves under their own parachute out of a perfectly good airplane, on the regular, in a wingsuit or alongside a group of 300 people or carrying an inflatable unicorn–has a 0.006% chance of dying from a skydive. That, dear reader, is the lowest rate in the history of the sport. Those are better odds than you enjoy when you’re driving to work.

Keep that in mind when you’re thinking about the risks of tandem skydiving. Tandem skydiving, as a matter of fact, has an even better safety record. Here’s the deal: there have been only 0.002 student fatalities per 1,000 tandem jumps, worldwide, over the past ten years. The National Safety Council makes the astute observation that you are significantly more likely to kick the bucket by being struck by lightning or by being stung by a bee. Our suggestion? Drive safely to and from the dropzone. That highway stuff is SCARY.

Skydiving Injuries Factor In, Too

Dying–on the unicorn-prancing-across-a-triple-rainbow chance that it happened–would obviously suck. But that’s not the only thing you’re considering, right? You’re worried about potential tandem skydiving injuries, too, and that’s a smart thing to be thinking about. It should go without saying that far more tandem students roll an ankle, scuff a knee or get a bruise.

Here’s the inside scoop, though–that’s something you have control over. To avoid injuries on a tandem skydive, here’s your strategy:

Have more questions? By all means, ask. We’re more than happy to talk to you about any point of curiosity you might have. Rest assured: When you land from that first jump, you’ll understand how the risks of tandem skydiving pale in contrast to the rewards. Don’t hesitate to reach out!