In September, the world’s most prestigious skydiving event returns to American soil – ‘The Mondiale’ also known as the World Parachuting Championships.

This is the Olympics of skydiving; the big kahuna. It doesn’t get bigger. To qualify for the event is a huge achievement because only the world’s best will be boarding the planes at Skydive Chicago starting on September 11th.

Competing in this prestigious event are two people we are proud of: Angela Tara Hsu and Josiah Rich of Team Malolo XP.

The two joined forces with Angela as performer and Josiah as camera flyer in the skydiving discipline known as Artistic Freestyle. Though Angela will be the one being evaluated by the judges, a successful team requires a highly skilled videographer who is able to position himself in the right place at the right time throughout the performance. For Josiah, this is not stationary flying, but rather a continuous flow of carving, switching and adjusting to speed changes based on Angela’s choreographed performance.

Artistic Freestyle is considered to be one of the most difficult forms of skydiving in the world. The discipline has been around for decades, but few are able to master the technical flying skill required to look as if one is dancing effortlessly in the sky. Unlike Vertical Formation Skydiving where teammates fly a pre-determined pattern of movements, Artistic Freestyle is more akin to ice skating whereby every team will create its own unique choreographed piece which will be subjectively evaluated by judges.

Angela finds joy in artistic freestyle because it requires one to be centered amongst the noise. Quiet. Focused. Relaxed. To watch Angela fly is beautiful as you see less a performer and more of a person who is putting her soul into her artistic expression and the result of that allows her to excel. Angela isn’t motivated by receiving medals, though this is the byproduct of her approach.

Originally from Hawaii, Angela found the air to be like the ocean: a place of peace and comfort away from the din of the world. Appropriately, ‘malolo’ means flying fish.

Angela started skydiving in 2004 and is as motivated today as ever. The process of working with Josiah and honing in on their performance is gratifying because it’s such a challenge to prepare for the world’s best on the highest stage.

If you’re jumping with us this summer, you’ll inevitably see Angela and Josiah training. Be sure to wish them luck as they prepare for skydiving’s biggest event. We’re excited for them and can’t wait to see their performance in September. 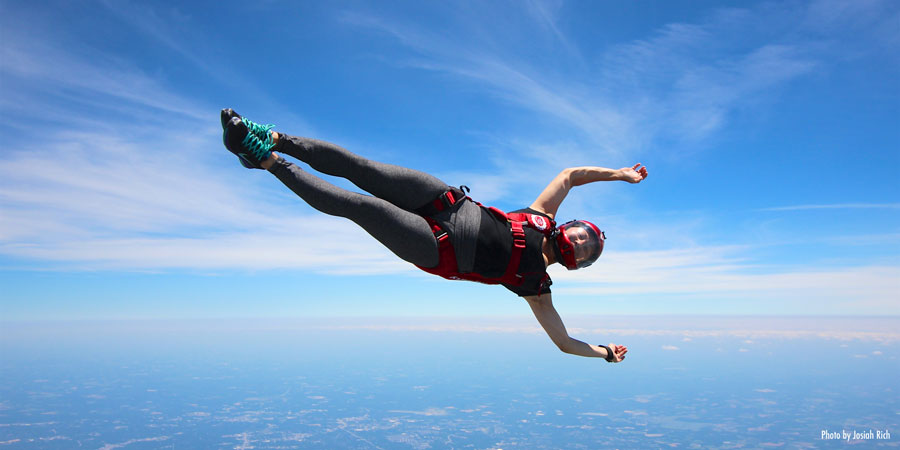 How Freestyle is Scored (as published by the FAI).

The technical aspect of the jump is judged on the degree of difficulty and technical execution of the moves chosen. e.g. it is easier to fly flat (belly to earth) than vertical (head or feet to earth). The rules contain detailed information on degrees of difficulty for each move.  The artistic aspect is judged on the flow of the performance – start, middle, end; use of the background and the sun; the interaction between camera and performer, and engaging the viewer. A panel of 5 judges, evaluates each jump independently and awards points between 0 – 10 for both the technical performance and artistic presentation in the free rounds, which are combined to give a score.  The event judge will discard the highest and lowest scores and average the rest.  Those are the points awarded to the team. The compulsory rounds are judged on the execution of the designated moves. Here the role of the camera flyer is to present the performer(s) as cleanly as possible.  Again the highest and lowest scores are discarded and the remaining averaged to give a score for the round.